COMMUNICATOR OF THE YEAR AWARD 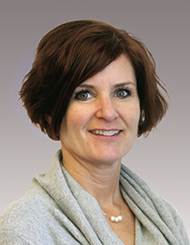 Nancy never imagined she’d cover sports. She only worked on the Marquette Tribune sports desk because all the news beats were taken. Nearly 30 years later, she’s now one of the most renowned sportswriters in the country.

The sports columnist for USA Today is based in Chicago, but her career has taken her all over the world. She’s been to every continent except Antarctica to cover the most high-profile sporting events, from the Olympic Games and the World Cup to the Masters and the Final Four. “For a kid who grew up watching Packers games with my dad every Sunday, it’s the best job in the world,” she says.

Previously, she was a national sportswriter for the Associated Press, where she provided breaking news coverage of the scandal involving underage Olympic gymnasts from China and how the team was stripped of its bronze medal from the Sydney Olympics.

Nancy now writes three columns a week, unafraid to tackle controversial societal issues relating to sports. Her coverage of protests from Colin Kapernick and other NFL players draws the most feedback, yet she considers those some of her most important columns. “It takes difficult conversations to move us forward in society,” she says.

While she has won several awards from the Associated Press Sports Editors, Nancy is humbled to be recognized by her alma mater. “Some of the past winners are people I have long admired,” she says, “and to join them is one of the greatest honors I’ve ever had.”

Fun fact: Nancy chose to attend Marquette because her brother told her to. “He has no recollection of that conversation,” she says, “but thank God he did!”