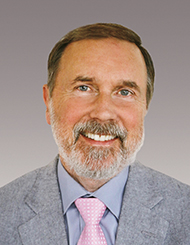 Tom has used his skills to help developing nations for more than 25 years through dental mission work.

As a baby, Tom was baptized at Church of the Gesu by the School of Dentistry’s chaplain, Rev. William J. McEvoy, S.J. During the service, Father “Mac” announced, “Here’s a little Jebbie” — and so it was destiny. Tom became a third-generation graduate of Marquette University, following in the footsteps of his father, uncle and brother.

Working hard, sharing what you have and being humble are values that have been passed from each generation to the next. As founder of the nonprofit Muchas Sonrisas Inc., which translates to “many smiles,” he helped establish or assist at clinics in Bolivia, Peru, Honduras and Guatemala. The corporation extends its reach and accessibility by offering portable clinics in areas without dental facilities.

“The children who I treat bring me face to face with Jesus in a special way,” he says. “The conditions I encounter in the mission field continuously remind me that we in the United States are ‘the rich man,’” and as told in 1 Peter 4:10, “Each of you should use whatever gift you have received to serve others.”

Previously an adjunct instructor at Marquette, Tom has been practicing dentistry in Clark County, Wis., since 1985, seeing about 2,000 active patients. His practice provides one “free mission day” a month, treating families for no fee. Tom’s wife, Mary, daughter, Nellie, and sons Eddie, Kit and Tim often accompany Tom on his mission trips.

Dream dinner guest: “Although he passed away almost 20 years ago, I’d like to have dinner with my dad one more time, and receive a few more wisdom-filled nuggets from him (Edward Gelhaus, Dent ’53).”

Marquette faculty or staff member who had an impact: Sister Gloria — “She always tried to make life easier for students. She taught me the way to earn love and respect is to treat people with love and respect. Her humility is something we can only grasp at.”