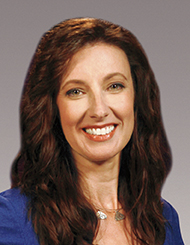 Sandy Patyk has made a name for herself — literally, her broadcasting name is Sandy Maxx — in Milwaukee TV, radio and online and in live sporting events as one of the very first Milwaukee Brewers’ game-day hosts. Having followed in the footsteps of her late father, Chuck Patyk, who started his career as a TV and radio newscaster, most famous for his coverage of the 1974 Super Outbreak tornadoes in Kentucky, Sandy has forged her own path in broadcast journalism.

Today, Sandy is an Emmy-nominated host and moderator of the Milwaukee PBS series The Arts Page, which features performances and interviews with artists from Wisconsin and around the world. The show recently celebrated its 200th episode. She also hosts an evening radio show on WKLH-FM.

For Sandy, the driving factor behind all of her projects is the connections she makes with her audiences, either interacting with them directly or introducing them to new artists and experiences.

“Whether it has been in front of the camera, on the microphone or behind the scenes producing, building relationships is where the rewarding feeling comes from,” she says.

Working for Marquette’s WMUR and MUTV gave Sandy a jump start to her broadcasting career. She considers Dr. Gregory Porter, her adviser when she was the WMUR general manager, one of the most impactful people she met at Marquette. “He exhibited incredible patience and wisdom every time I visited his office seeking counsel for my latest challenge in leading a group of college students,” she says.

Sandy translates the Marquette mission into her work by setting high standards for herself and her projects. She makes every performance count, and she knows that makes her father proud.

Fun Fact: Sandy had an out-of-this-world experience when she was chosen to participate in a 2017 #NASASocial Tour of Houston’s Johnson Space Center and was able to ask a question of American astronauts Shane Kimbrough and Peggy Whitson during a live transmission with the International Space Station.