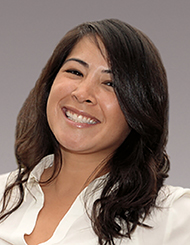 As the senior director of public relations for the Chicago White Sox, Sheena ensures the team’s presence off the field carries just as much weight as their work on game day.

“Baseball has such an incredible history to foster positive change and create change for so many individuals and communities,” she says. “I’m blessed that I’m in a position to be able to hear those stories and connect them with audiences who care.”

Sheena plays an active role in the organization’s involvement in the Chicago Sports Alliance, a collaboration between five professional Chicago sports teams in support of finding solutions to the violence plaguing their city. A first-generation Filipina American, she also takes pride in promoting the club’s diversity efforts and built the event series, “Game-changers: Diversity in Baseball,” last season.

At Marquette, Sheena found the right balance of education, faith and service that pushed her to pursue excellence — a trait that’s propelled her throughout her career. She was recently selected to participate in Major League Baseball’s Katy Feeney Leadership Symposium, an event that brought 40 female MLB executives together to cultivate leadership skills and focus on career advancement in the industry. “I’m humbled to continue building pathways for future young men and women to seize opportunities where they can utilize their skills to do service for others,” she says.

Previously, Sheena worked for Public Communications Inc., where she contributed to campaigns for the Shedd Aquarium and Six Flags Great America, among others. She’s actively involved in the Marquette Ethnic Alumni Association.