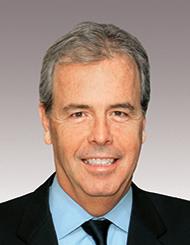 The leadership lessons Charlie learned at Marquette have helped him lead his Chicago-based marketing and media solutions company, Intersport, to growth and success for more than 30 years.

As founder, chairman and CEO of Intersport, Charlie has an Emmy Award-winning programming career that includes the creation, production, distribution and packaging of thousands of hours of content across ABC, ESPN, CBS, Fox and NBC, as well as many prominent cable networks and digital platforms. Under his direction, the company has become a 20-time Emmy Award winner, produced content for many of the world’s most recognized brands, executed hundreds of events per year on the biggest sports and entertainment stages, and owns and operates nationally televised stadium events across the country.

Charlie was a varsity student-athlete during his years at Marquette and received the prestigious Robert L. and William P. McCahill Award in 1972, as the university’s outstanding student-athlete. He later graduated from Marquette University Law School in 1975.

“When I was 17, going to a good school in a big city that had a great basketball program seemed to hit all the bases for me,” Charlie says. “What I got out of the experience was far greater than that.”

Charlie lives in Chicago with his wife, Rebecca, and their five children. As a family, the Bessers are committed to many civic and charitable efforts, including Teach For America-Chicago and the YMCA of Metropolitan Chicago, where Charlie serves on the boards of directors. In 2018 Bessers’ son, Brennan, and daughter Rachel founded Walk On! America, a national effort to raise awareness and charitable donations to support the underserved Intellectual and Developmental Disability community. As a kick-off to start a larger national conversation, Brennan — on bicycle — and Rachel embarked on a journey across the United States from Seattle to New York City in order to shine a spotlight on this community.