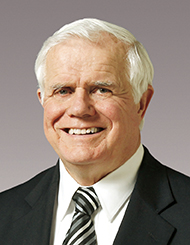 Bill’s commitment to the success of the Marquette Athletics program went far beyond his role as the director of athletics, a position he held two times.

Bill first served from 1987 to 2007, then again in an interim capacity in 2014, when he came out of retirement to help the university during a transition period. He made many contributions to the university, students and community during his years of service.

There were many successes during Bill’s tenure, collectively achieved, that helped make Marquette Athletics stronger and better. In 1988 Marquette joined its first conference — the Midwestern Collegiate Conference (1988–91) — followed by membership in the Great Midwest Conference (1991–95), Conference USA (1995–2005) and the Big East Conference (2005–present). Each new conference brought a higher level of competition while bringing greater visibility and exposure for the university.

To raise scholarship funds for student-athletes, Bill helped establish the Blue & Gold Fund in 1994 and the Men’s Basketball Seating Priority Plan, which together raised over $3 million by 2007. In the mid-1990s, he started the summertime National Youth Sports Program to help Milwaukee area youth. He was named Continental Region Athletic Director of the Year in 1999 and was inducted into the M Club Hall of Fame in 2009.

Receiving the Hy Popuch Award is especially poignant for Bill: “It is an honor to be chosen by former student-athletes because they were the ones who made things happen to help Marquette Athletics grow stronger and better. It is a recognition of the dedication, sacrifice and hard work of the many people I worked for and with who supported us in achieving success from 1987 to 2007.”

Fun Fact:
In his senior year at Butte High School, Bill was selected 1st team All-State for football (unanimous) and basketball. He was inducted into the Butte Sports Hall of Fame in 2011 and was a standout in football at Montana State University.