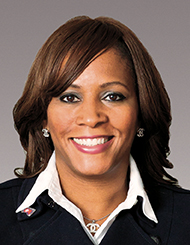 Hosanna — a builder at heart — focused on urban education and building community for 30 years before she was called upon to uphold her family’s legacy in the construction industry.

“Sometimes when performance is not at the level expected, the problem is not the strategy or even execution but instead the environment,” says Hosanna. “I experience pure joy watching families celebrate their children’s accomplishments or parents showing children their new home or new bedroom.”

In high school, Hosanna was first placed on a vocational track rather than in college prep classes. Her life changed when a counselor for the Educational Opportunity Program (EOP) visited her home and strongly encouraged her to attend Marquette. “The Marquette EOP team’s belief in me was unshakeable, and I knew it. Anything less than excellence was simply not an option,” she says.

Most notably, Hosanna served as the first African American state superintendent of education for the District of Columbia. In addition to many other roles, she served as chief of staff to Arne Duncan during his tenure as chief executive of Chicago Public Schools. She later went on to become U.S. Education Secretary.