ALUMNUS OF THE YEAR AWARD 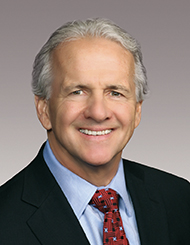 Jim was just 30 when he took the reins of his family’s Wisconsin-based cheese business in 1986. Under his savvy leadership, Sartori Company’s products have become premium international retail brands that regularly win awards, while the company itself has remained true to its family and artisan values.

Despite sales in all 50 states and more than 45 countries, more than 400 national and international quality awards, and having in his product portfolio the country’s most-decorated Parmesan cheese (SarVecchio), Jim hasn’t let success go to his head. Nor has he allowed it to distract his team from Sartori’s singular mission: to make the best cheese in the world.

That means no shortcuts to the artisan process (all Sartori cheese is handcrafted), trusted sources for the best milk (second- and third-generation family farms), and core values that include humility, integrity and creativity. These, Jim has passed along to the two of his three children who are the fourth generation of Sartori Company — Bert Sartori and Maria Sartori, Grad ’12.

Jim says he “literally grew up in the cheese plant” his Italian grandfather co-founded in Plymouth, Wis., in 1939. Though he loved making cheese, he always felt more drawn to the business side of the family enterprise.

He was delighted to be admitted to Marquette University, where he roomed with his boyhood best friend, Randy Rudolph, Bus Ad ’77, throughout his four years studying marketing in the College of Business Administration.

His time at Marquette influenced Jim both professionally and personally. He came to understand and embrace business ethics in a memorable course taught by Rev. Thomas Davitt, S.J. He also met Janet Pomatto Sartori, Dent Hy ’77, at freshman orientation on his 18th birthday. They married in 1978 and Jim cites her as the most influential person in his life. Together, he says, they have rooted their family life in Christian faith, which he says is the foundation of the Marquette mission of excellence, faith, leadership and service. These tenets also help guide his approach to business, in ways that include sharing credit for success and even profits with Sartori team members and all family farm milk suppliers.

The Sartoris also share the fruits of their success with involvement in philanthropic organizations and several Marquette initiatives including the Marquette Innovation Fund and entrepreneurship initiatives. Jim is also helping Global Brigades and Squads Abroad, founded by Dr. Shital Vora, H Sci ’04, PT ’06, with an initiative to build the capacity of Central American farmers and support the Sister Maria Rosa Mission in Honduras.

Fun fact: Jim’s grandmother, Elizabeth Himley, earned her degree from Marquette at age 82, when Jim was a freshman. At the time, she was the oldest female graduate of Marquette.