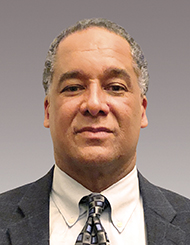 As CEO of several companies over his celebrated career, Phil leads by example — keeping his faith at the center of his decision-making.

If work ethic is inherited, then Phil’s mother likely passed that quality on to him. She was the oldest of 10 siblings, began working at an early age to help support her family, went on to raise four boys of her own — as a single parent — and worked every day in a factory for 35 years.
Marquette’s Educational Opportunity Program was Phil’s open door to a better life. He says, “Marquette was a refuge that allowed me to get a great education, overcome very challenging obstacles and alter the long-term legacy of my family.”
Phil did just that. He has been an executive in the cable and communications industry for more than 20 years. He co-founded several broadband investments firms that have acquired more than 20 cable systems over the years. He specializes in areas including business acquisitions, leadership development, operations and sales. His company currently owns 25 cable and broadband systems in North and South Carolina, Georgia, Washington, Idaho, California and Texas.

He currently serves as president and CEO of Northland Communications and is an owner of Mega Broadband Investments. He says the most rewarding part of his career is “being a good steward, providing a positive work environment for our employees and returning substantial returns to investors over the years.”

Phil serves as a model in the community as well. He has served as a board member for an urban hospital foundation and is active with the Hope Center, which operates a Christian community center, a charter school and an urban health clinic.

Phil says receiving this award “confirms the belief that a lot of hard work, dedication and focus pays off.”

Marquette faculty or staff member who had an impact: Sande Robinson, director of EOP

Favorite Marquette memory: “The daily interaction with fellow students in the union between classes and on the weekends.”