DISTINGUISHED ALUMNUS OF THE YEAR AWARD 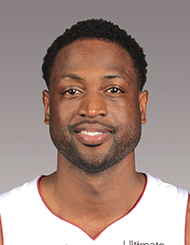 Dwyane Wade left Marquette as one of its most-decorated athletes when he was drafted fifth overall by the Miami Heat in the 2003 NBA draft, making him the highest-ever drafted Marquette athlete. Dwyane helped lead Marquette back to the Final Four in 2003 for the first time since its national championship season in 1977 by registering only the third triple-double in school history. His 29 points, 11 rebounds and 11 assists led Marquette past No. 1-overall seed Kentucky in the Elite Eight.

In 2003 Dwyane was a consensus first team All-American and was named as the Conference USA Player of the Year and Defensive Player of the Year. Dwyane’s 2003 season ranks as one of the best, statistically speaking, in Marquette history.

Following his career at Marquette, Dwyane has collected a hall of fame career in the NBA, which includes stops in Miami, Chicago and Cleveland. He owns three world titles, 13 NBA All-Star selections, a pair of All-NBA First Team accolades, one NBA Finals MVP honor and ranks among the league's all-time best in multiple categories. He also helped the USA Basketball Senior National Team to the gold medal at the 2008 Olympic Games and the bronze medal in 2004.

But Dwyane’s accomplishments on the court are only part of the reason he is a Marquette All-Star. Wade’s World Foundation, Dwyane’s charitable foundation, partnered with Marquette’s Hartman Literacy and Learning Center to establish the Live to Dream Summer Reading Program. This initiative supports Milwaukee’s schoolchildren by helping them maintain or improve their reading skills over the summer. The Wade’s World Foundation provides support to community-based organizations that promote education, health and social skills for children by funding initiatives in underserved communities in Chicago, Milwaukee and South Florida.