Our mission is to make innovative contributions to synthetic chemistry and biology by:

We focus on using natural products as inspiration for the design and preparation of unique molecules that are typically more accessible than the natural lead compound, but also possess improved properties, particularly for human therapeutic applications. A number of the world’s top total synthesis labs have explored such a strategy to some extent, but in general this approach is underutilized. Several examples of important drugs are provided in the figure below which highlight typical differences between traditional synthetic molecules and natural products. We endeavor to prepare molecules of intermediate complexity that can maximize the advantages of natural products while minimizing their disadvantages, as well as the disadvantages of easy-to-prepare “flat” synthetic molecules that may be more promiscuous binders and may give undesired “off-target” effects in biological systems, complicating their use as probes and drugs. 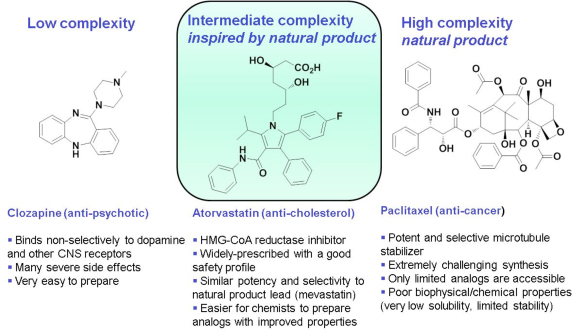 Current projects under execution or in advanced planning stages

Chris received his B.Sc. (co-op) in 2000 from the University of Waterloo (Ontario, Canada). While at Waterloo, Chris developed a keen interest in organic and biological chemistry during several internships in the pharmaceutical industry. This inspired him to undertake graduate studies with Prof. Mark Lautens (University of Toronto, 2000-2006), where he developed several valuable new ring-opening and ring-forming reactions and used them to prepare scaffolds for drug discovery efforts with an industrial collaborator. Chris was a post-doctoral fellow with Prof. Stephen Martin at the University of Texas at Austin (2006-2009), where he first developed an interest in diversity-oriented synthesis (DOS) and the preparation of “natural product-like” molecules. In 2009, Chris joined a new group at the Broad Institute (Cambridge, MA) under the direction of Prof. Stuart Schreiber, with a focus on medicinal chemistry and the development of chemical probes for the interrogation of important biological processes. Chris joined the Department of Chemistry at Marquette in the fall of 2012.