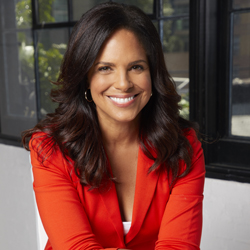 This year, in partnership with the Marquette Forum, the Diederich College of Communication is pleased to welcome Soledad O’Brien as the 2019 Nieman Lecturer.

On February 26 at 4 p.m., O’Brien will deliver her lecture “Reporting on Politics in ‘Crazy Times’” in the Alumni Memorial Union Monaghan Ballroom. “Are Journalists the Enemies of the People?” panel discussion moderated by Dave Umhoefer, the Director of the O’Brien Fellowship in Public Service Journalism, will immediately follow the lecture. Special thanks to the Marquette University Law School, Raynor Memorial Libraries, and Center for Gender and Sexuality Studies for their additional support.

This lecture is now SOLD OUT. Due to the popularity of this event, attendees will be required to show their tickets upon entering the ballroom.

Soledad O’Brien serves as the CEO of Starfish Media Group and anchors and produces the Hearst Television political magazine program “Matter of Fact with Soledad O’Brien.” She is also a reporter for HBO’s “Real Sports with Bryant Gumbel” and PBS NewsHour. Previously, O’Brien anchored for two CNN morning news programs and created the “In America” documentary series. Prior to joining CNN, O’Brien anchored on “Weekend Today” and was a contributor to the “Today” show and “NBC Nightly News.”

During the course of her career, O’Brien has won three Emmy awards: two for her coverage of race issues and one for her reporting on the 2012 presidential election. She is also the recipient of two Peabody awards.

O’Brien is also the author of “Latino in America” and a critically acclaimed memoir “The Next Big Story.”

O’Brien lives in New York with her husband, Brad Raymond, and their four children.

The Lucius W. Nieman Symposium, named after the founder of The Milwaukee Journal, Lucius W. Nieman, is an annual event sponsored by the J. William and Mary Diederich College of Communication. In addition to presenting a public address, the Nieman Lecturers meet with Marquette University students and faculty.