A Brief History of the Dental School

The Marquette University School Dentistry began as the Dental Department of the Milwaukee Medical College on Sept. 26, 1894. There were nine faculty for the 30 entering freshmen. The dental clinic consisted of 16 chairs and a technique laboratory.

In 1897, the National Association of Dental Faculties, the acknowledged regulatory body of the day, investigated the MMC and elected it to membership. This membership recognized the MMC as a reputable school. By 1900, the Dental Department of the MMC had graduated 103 students. Many of them became prominent and played important roles in advancing dentistry in Wisconsin.

In 1899, another dental school came into existence in Milwaukee. The Wisconsin College of Physicians and Surgeons (P&S), which had opened in 1893, added a dental department. Both schools competed for students and faculty.  P&S was never well attended and, in 1913, merged with what by then was Marquette University.

In 1902, Dr. Henry L. Banzhaf, a very prominent Wisconsin dentist, was named dean of the Dental Department of MMC. His affiliation with the school lasted 42 years.

In 1907, Marquette College — a liberal arts school in Milwaukee affiliated with the MMC and its four departments, dentistry, medicine, nursing and pharmacy — became a university. Dr. Banzhaf, while retaining his appointment as dean of the dental college, also became business manager of the dental, pharmacy and nursing schools. In 1921, he was appointed business manager of the entire university.

The course of instruction in the dental school consisted of a six-day week with a lecture at 8 a.m. each day and another at 5 p.m. Clinic and laboratory hours extended from 9 a.m. to noon and 1 p.m. to 5 p.m. all days. Lecturers received no remuneration, but laboratory and clinic instructors were paid. Tuition fees were $100 per student per year up until 1906. By 1916, they were $170 per year.  Books for a four-year education cost $130, and instruments and supplies cost another $560.

In 1921, a new dental school opened at 604 N. 16th St. The acquisition of the old Milwaukee Dental College helped make Marquette a university, and our steps have been well worn by countless students, patients, staff and faculty during the past nearly eight decades. Over time, however, buildings age, programs change and absolutely nothing lasts forever.

In 1921, Dean Banzhaf secured permission to build a new dental building. The new building was ready for occupancy in 1923 and featured a dental clinic of 150 chairs. The clinic eventually expanded to 167 chairs and earned the reputation of being "the largest dental clinic under one roof." A major innovation of its day in the new building was a diagnosis laboratory for dental patients. It was one of the first laboratories of its type established in connection with a dental clinic, was visited by dental educators from many other schools and was praised as a pioneer effort of great significance in the history of dentistry.

Something old, something new

In the early 1970s, the antiquated 1921 facility was gutted, and a new dental school emerged. There were compromises involved in using the old shell. For 25 years, students and faculty, on occasion, struggled with their environment, trying to maintain a quality program. Attempting to maintain the program in the midst of the renovation was a nightmare. An additional 20some years of accumulated plumbing, wiring, wear and tear were added to the 1921 shell.

But this all became a thing of the past when the new building was constructed in 2002.

From the ground up

In August 2002, dental tenants left behind an aging facility filled with many memories, good and not so good. It was a new beginning for dental education at Marquette University, a bright future waiting to be realized.

The school was given the rare and wonderful opportunity to build a ground-up facility conceived and planned around technological improvements and innovative teaching methods.

The school adjusted smoothly to a window-rich environment complemented by liberal doses of technology. Once settled, faculty, staff and students had a chance to see the remarkable effect this new facility could have on the delivery of dental education and patient care.

In September 2012, the university broke ground on a 40,000-square-foot expansion that provides for the school more clinical space and updated state-of-the-art technologies; assists with the retention and recruitment of quality faculty; and allows space for additional students to address future workforce needs. 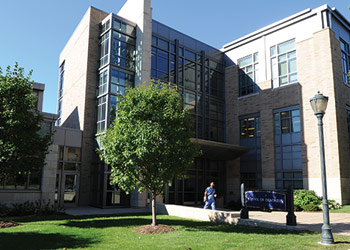 Trinity Hospital of the Milwaukee Medical College. Located at Wells & 9th Streets, it was here on September 26, 1894 that the School of Dentistry admitted its first freshman class.

The dental school in front and the old medical school attached behind. This is where the current science library was constructed in the early 70s.

The old dental clinic as seen from a second floor balcony.

In 2002, we were given the rare and wonderful opportunity to build a facility conceived and planned around technological improvements and innovative teaching methods.