In 2010 the then Superior General of the Society of Jesus, Adolfo Nicolás, warned of the “globalization of superficiality” resulting from technological and social shifts prioritizing immediate engagement over thoughtful consideration. This tendency contrasts with Socrates’s famed pronouncement that “the unexamined life is not worth living,” suggesting that the cultivation of a meaningful life is particularly difficult today. The aim of this seminar, then, is to explore practices that might allow one to pause and appreciate the richness that everyday life offers through the joys of food, music, art, etc., so that students will be better equipped to find and enjoy depth of meaning throughout their lives in an increasingly superficial age.

The decreasing cost and complexity of the tools needed to create video is making it easier for you to create a video to inspire social change. This seminar will expose you to needed skills to produce a 3- to 5-minute issue based video. The class is targeted toward beginners in video production and includes a lot of hands on activities in the Raynor Memorial Libraries Digital Scholarship Lab. By the end of the course, you will have built confidence in your digital media skills, become aware of production resources on campus and beyond allowing you the ability to develop multimodal projects for other classes and activities.

In this course, we will explore major themes in American history from the turn of the twentieth-century to the present through Hollywood film. In particular, we will focus on the reunion of the United States in the aftermath of the Civil War and World Wars, and the nation’s integration into the global world. Themes include colonization and decolonization, empire and revolution, domestic and international politics, propaganda and media, depression and the world wars, civil rights and violence, and others. Films include Amigo, Flags of Our Fathers, Hidden Figures, The Post, Wind River, among others.

Students will have the opportunity to see a wide variety of art and to learn of the many ways art is created. Students will really view art and think about what the work is communicating. The seminar will have an active learning experience with numerous visits to galleries, museums, and artist’s studios. Students will meet with an assortment of artists and observe their creative process firsthand. We will also meet with professionals in the art world (curators, designers, conservators, etc.) to lean about their careers and career paths. We will consider the role of art and art institutions within our society and how art can serve as a catalyst for social change. Class visits will include: the Milwaukee Institute of Art and Design, The Milwaukee Art Museum, The Milwaukee Public Museum, The Portrait Society Gallery, St. Paul's Episcopal Church, the Lynden Sculpture Garden, Sculpture Milwaukee, and others. The class will meet at the Haggerty Museum of Art, allowing for regular viewings of the Haggerty’s fall exhibitions and permanent collection.

Students learn how Narrative Psychologists analyze people by collecting and interpreting life stories. We use an individual's self stories of one’s past, present, and future to discover relevant aspects of a person’s identity.

In the centuries preceding the rise of Christianity, philosophy had come to occupy the position of life guide for at least the educated people of the Ancient Greco-Roman world. There is a directedness in the philosophical literature of this period that was to be lost in medieval philosophy. It is perhaps irrecoverable after the modern expectation that philosophy first determine what we can know before turning to what we ought to do and what we may hope for.

We will read a small selection of writings by Cicero and Seneca.  One or two pieces by Greek writers of Roman Imperial times may be added. The purpose of this discussion will be to not simply become acquainted with what some old texts say but rather to see, and meditate on, the timeless truths contained in them.

A lecture series with discussion sections, this seminar will explore what is required to safely send humans to Mars. NASA and SpaceX have set a goal to send humans within 10–15 years but the details of the journey have not been provided. Students will explore the multitude of challenges including, but not limited to, rocket and habitat design, and the effects of microgravity and radiation all within the historical context of human exploration. No specialized knowledge of math or physics is required. 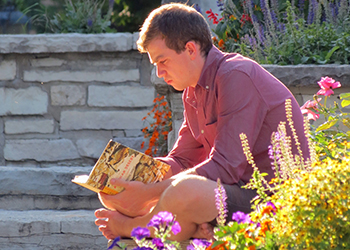 Visit the online donation form. Enter the amount you wish to give. Choose "Other Fund Designation" from the "Designation" drop-down menu. Click or tap the "add donation" button and type "Honors Program" into the "Provide details if other designation is selected" text box.