Marquette University is a vibrant academic community with a 133-year history of leadership in Catholic and Jesuit higher education. The university’s 11 colleges and schools, including Wisconsin’s only School of Dentistry and one of only two law schools in the state, enroll nearly 12,000 students. These students come to Marquette’s campus in Milwaukee from every state and 72 foreign countries.


Marquette University: It's the search that
makes us who we are.

Through a rigorous, values-centered curriculum, Marquette students prepare for work in an increasingly complex and diverse world and anticipate lives of ethical and informed leadership. Faculty members are true teacher-scholars whose scholarship enriches what is taught in the classroom and contributes to the expansion of human knowledge. Research at Marquette identifies responses to critical issues such as water shortages in developing countries, better care for children with orthopedic diseases, new treatments for neurological disorders and addictions, and more.

Fulfilling the dream of Milwaukee’s first archbishop, the Most Rev. John Martin Henni, Marquette opened in 1881 to meet the needs of a city experiencing rapid industrialization and waves of immigration. Families headed by hardworking parents found the doors to higher education open for the first time. Again and again, the university has affirmed this founding vision of providing educational access for those who seek it. In 1909, Marquette admitted women, making it the first Catholic university in the world to educate undergraduate men and women side by side. Marquette’s pioneering Educational Opportunity Program, established in 1969 by Dr. Arnold Mitchem to support first-generation students, became a national model and led to the establishment of the Washington D.C.-based Council for Opportunity in Education. The university was the 10th higher education institution bestowed the Changemaker Campus title by the Ashoka Institute, a leader in social entrepreneurship — the practice of applying sustainable business models to solve social problems.

Marquette’s location near the heart of Milwaukee reflects the dedication of the Jesuits to urban education and benefits students through opportunities to engage neighbors and access a wealth of internships and service learning programs. In 2013, Marquette was named to the President's Higher Education Community Service Honor Roll for the seventh year in a row. The university’s investment of nearly $400 million since 1995 in campus construction, renovation and improvement projects has enhanced educational programs and facilities and helped revitalize Marquette’s surrounding neighborhood.

Marquette’s athletic teams compete in the highly competitive Big East Conference, and the university’s more than 110,000 alumni worldwide are known both for their commitment to the university’s academic mission and their boundless passion for Marquette athletics. 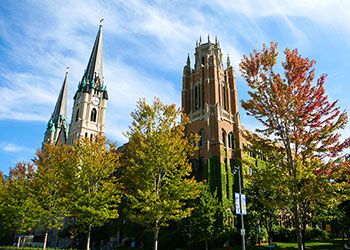 The Inauguration Ceremony of the 24th president of Marquette University, Dr. Michael R. Lovell was September 19

Go for a run with Dr. Lovell, meet the family, get inspired.