Marquette.edu // Office of Research and Innovation //

After having access to the facility, Marquette faculty members specializing in water research began meeting monthly during the academic year as part of Marquette’s participation in Milwaukee’s Global Water Center. As colleagues briefed each other on projects underway in their labs, their scientific approaches and research aspirations, the participants — mainly from environmental engineering and biological sciences in the early days — quickly revealed areas of shared interest and potential collaboration. They began inviting colleagues from other disciplines — hydrologists, chemists, social scientists, law policy and education scholars — and saw the circle of complementary expertise and eager collaborators expand again and again.

Marquette's first research and development cohort at the Global Water Center comprised several different project groups that span a variety of disciplines and focus areas, including wastewater treatment, rainwater harvesting, desalination, water law and policy, and public art. Many of the teams are cross-disciplinary and include students, and a number of projects are collaborations with researchers from the University of Wisconsin-Milwaukee, as well as industry partners such as A.O. Smith and the Metropolitan Milwaukee Sewerage District.

Out of this collaboration, multi-disciplinary teams have formed, courses have been developed and grants have been sought and obtained. And recently, this approach generated its biggest dividends yet when Marquette received its largest federal award to date for water-related research — $3.8 million from the U.S. Army Corps of Engineers — to fund the ambitious Novel Technologies to Mitigate Water Contamination for Resilient Infrastructure program also called by the researchers In Defense of Water.

Take a look inside 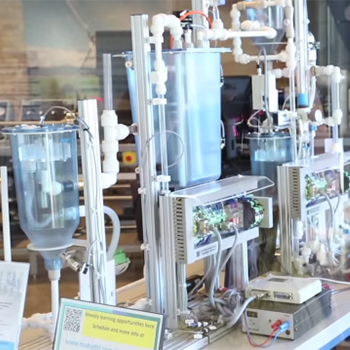 Learn about the rest of Marquette's water initiatives, including academic programs and events.