The case for Marquette’s employment decision

On April 19, the Wisconsin Supreme Court will hear an appeal brought by a Marquette University political science associate professor, who was suspended for his mistreatment of one of our Marquette student teachers. We would like you to know what this case is about.

This is about protecting our students
Sadly, John McAdams painted a target on the back of an MU student teacher when he used his personal blog to mock her, writing about a secretly recorded conversation that took place after class. He crossed the line when he exposed her name and contact information in front of a hostile audience.

He then booked a string of media appearances to whip up outrage against her. Unfortunately, it worked. The student teacher received more than 100 hateful, threatening messages, feared for her physical safety and left Marquette for another university.

This is about decency
To this day, he continues to casually dismiss the hateful messages our student teacher and others received, saying that she got “some blowback” from his blog post. The associate professor’s description is not even close to the truth. Here are some of the actual messages that were sent.

Warning: The following messages are disturbing. Our former student’s name is obscured along with the names of those who posted. 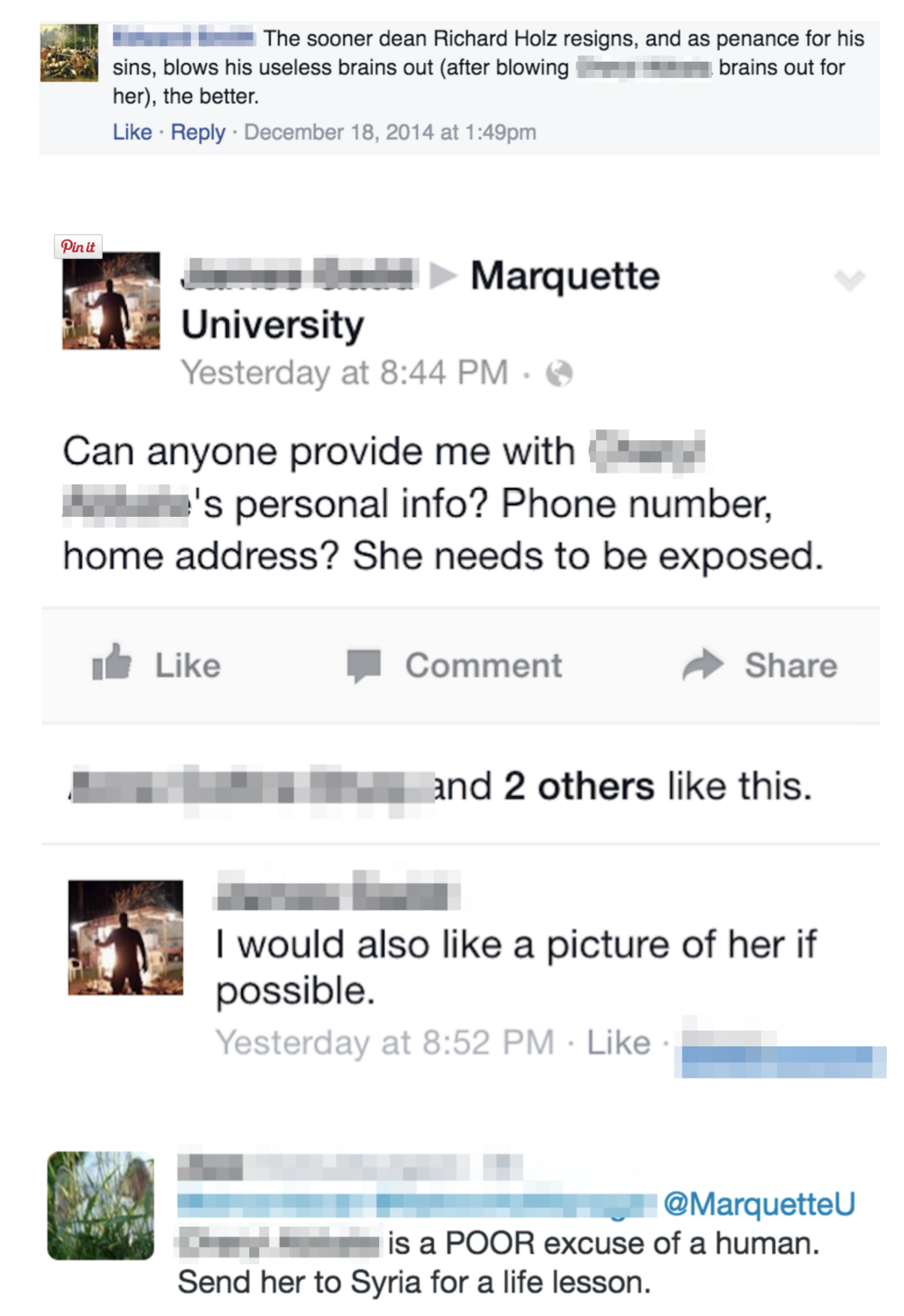 This is about diligence and fairness
These posts are horrific and jarring, but it is important to show the foreseeable consequences of the associate professor’s actions. After investigating what had happened, the university took the important step of initiating its faculty disciplinary process. This is an established process -- created jointly by the administration and the faculty -- that ensures diligence and fairness.

Seven tenured faculty members, chosen independently by the University Academic Senate from across the university, ruled unanimously that the associate professor’s “seriously irresponsible conduct clearly and substantially fails to meet the standard of professional excellence” and is in violation of his contract. The Milwaukee Journal Sentinel summarized the 123-page Faculty Hearing Committee report with the following headline: “MU report suggests pattern of bullying by suspended McAdams.”

Subsequently, after a year-long review, a Wisconsin Circuit Court judge dismissed the professor’s case, ruling that academic freedom does not mean that a professor can harass, threaten or intimidate a student.

This is about an employee crossing the line
John McAdams has published more than 3,000 blog posts on a variety of topics, enjoying academic freedom and freedom of speech for 40 years. His political views have never been called into question. Let’s be clear where the line was crossed. Academic freedom does not extend to putting a student in harm’s way.

Had he written the exact same post without naming the student teacher and linking to her contact information, he would not have been disciplined. Sadly, he did, and he violated his contract and duties to Marquette students.

He refused to acknowledge and commit to following the unanimous findings from the in-depth report written by his very own peers, stating that he would only do so “when hell freezes over.”

Marquette is a caring community that emphasizes cura personalis — care for the whole person. This is about preserving these Guiding Values and Catholic, Jesuit mission.

Interestingly, in a Feb. 14, 2005 blog post, the associate professor himself notes that “professors should have the freedom to make controversial statements. But directly insulting students goes too far.”

On this point, Marquette couldn’t agree more with the associate professor.

Facts About The Case

MYTH: John McAdams' employment contract has no limits on what he can say on the internet.

MYTH: McAdams was disciplined for expressing conservative views, which he and his lawyers have suggested are not welcome at Marquette.

FACT: Disciplinary action was taken against John McAdams because he jeopardized the safety of a student teacher, putting her directly in harm’s way by publishing her name and contact information on his blog. Over the past 40 years Marquette never called John McAdams’ conservative views into question, including his publishing more than 3,000 blogs and internet postings on a variety of topics.

MYTH: John McAdams exhausted all other options, and his only choice was to post the incident to his blog.

FACT:  John McAdams explored no option other than using his blog to dox a student teacher.