4 sem. hrs.
Survey of classical physics for science majors and engineering majors. Kinematics in one and two dimensions. Newton's laws of motion and dynamics, including rotation of rigid bodies. Energy concepts in physical systems. Newton's law of universal gravitation. The first law of thermodynamics, harmonic motion, and Einstein's special relativity. A command of high school algebra, geometry and trigonometry is assumed. Requires the use of introductory calculus. Offered fall term. Coreq: MATH 1450.

3 sem. hrs.
Basic concepts in the physical sciences and their impact on technology, the humanities and the world. Course designed for non-science majors. This course satisfies the Arts and Sciences core curriculum requirement. Offered occasionally.

3 sem. hrs.
An introduction to the science of the atmosphere as it relates to the weather of the earth. Topics will include the gas laws, heat transfer, causes of the seasons, atmospheric optics, humidity, clouds, atmospheric stability, causes of precipitation, atmospheric motions, air masses, fronts and pressure systems, thunderstorms, tornados, and hurricanes. Emphasis will be put on how weather is forecast and how it relates to everyone's life. This course satisfies the Arts and Sciences College Curriculum Natural Science requirement. Offered fall term.

3 sem. hrs.
Impact of human activities on the environment, especially the consumption of fossil fuels. Population distribution and growth. Energy balance of the earth. Energy, land and water use, the water cycle. Effects of chemical and physical pollutants on water and the atmosphere. Course designed for non-science majors. This course satisfies the Arts and Sciences College Curriculum Natural Science requirement.

4 sem. hrs.
A study of motion in its various forms, translational, rotational, and vibrational, that emphasizes their underlying unity, especially the central role of energy and its conservation, and their basis in the fundamental Newtonian laws of motion and Einstein's special relativity. These ideas are used to explain thermal processes. Prereq: MATH 1450, which may be taken concurrently. A command of high school algebra, geometry, trigonometry is assumed. Requires the use of introductory calculus. Students cannot receive credit for both PHYS 1003 and PHYS 1013.

4 sem. hrs.
This course, continuing the development of energy as a fundamental concept, includes a study of electric and magnetic phenomena, and their unification in the theory of electromagnetism. Applications are made to waves, geometric and physical optics, atomic spectra, and nuclear decay and introductory quantum mechanics including wave function and bound systems. Prereq: MATH 1450, MATH 1451 or MATH 1455 which may be taken concurrently, and PHYS 1003 or PHYS 1013. Students cannot receive credit for both PHYS 1004 and PHYS 1014.

0 sem. hrs.
An overview of research activity, specialties, and opportunities for undergraduate research is provided through an in-depth visit each week to a different research laboratory at Marquette University and the Medical College of Wisconsin. All science students interested in learning about research are encouraged to take this course. SNC/UNC grade assessment.

3 sem. hrs.
A survey of the physics of matter and materials. Atoms and the forces between them, molecules, the states of matter, kinetic theory, perfect and imperfect gases. Statistical physics: classical statistics and the Boltzmann factor, quantum statistics. The solid state: cohesion and structure, electrical, magnetic, thermal and elastic properties. The liquid state: cohesion and structure, latent heat and melting, flow in ideal and real liquids. Offered spring term. Prereq: MATH 2450 and PHYS 1002; MATH 2450 and PHYS 1004; or MATH 2450 and PHYS 1014. Prerequisites may be taken concurrently.

3 sem. hrs.
Computational techniques applied to problems in the physical sciences. Construction of models of physical systems. Generation and analysis of data. The role of models in developing physical theories. Course assignments will use a variety of programming environments and commercial software. Offered occasionally.

3 sem. hrs.
Nature of the Milky Way galaxy from an observer's prospective: stellar statistics and distributions, stellar populations, spiral structure, the Galactic nucleus, and the Galactic halo. Nature of ordinary galaxies, galaxies in our Local Group, structure of voids and ands superclusters. Nature of peculiar objects: Seyfert galaxies, starburst galaxies, and quasars. Elementary aspects of physical cosmology. Introduction to techniques used in modern optical and radio astronomy with emphasis on the physical and mathematical understanding of the detection of electromagnetic radiation. Typically offered during spring term, odd years. Prereq: PHYS 1013/1014 or PHYS 1003/1004 or (PHYS 1001/1002 with consent of instructor) and PHYS 1008 and PHYS 2004 and PHYS 3021.

1 sem. hr.
The frontiers of research in biophysics, and the techniques employed, are explored through attending the weekly Biophysics Seminar at the Medical College of Wisconsin and participating in a follow-on discussion after each seminar. Offered both fall and spring terms. Prereq: Jr. standing. May be taken more than once for credit. This course may not be used to satisfy the 30 cr. hr. minimum requirements for a bachelor's degree in physics.

PHYS 4046/5046. The Physical Basis of the Biological Environment

3 sem. hrs.
The molecular processes of life occur in a complex aqueous molecular environment. Biological molecules and their environments are governed by the principles of physics. This course presents and explains physical techniques and models based on mechanics, thermodynamics, and electricity and magnetism, and shows how they apply to help characterize and understand the environments in which cells and biological molecules operate, while also helping to explain cellular and physiological processes. Typically offered Fall term, odd years. Prereq: PHYS 1002, 1004 or 1014 and CHEM 1002, MATH 1410 or MATH 1451.

3 sem. hrs.
An introduction to the field of biological physics which develops the science and illustrates the applications of the techniques of X-ray diffraction and spin resonance to problems of biological interest: protein structural dynamics, ion channels and transport through cell membranes. Typically offered Spring term, even years. Prereq: PHYS 2004 and PHYS 4031, or PHYS 4046.

3 sem. hrs.
Topics drawn from areas of current interest such as astrophysics, atmospheric physics, condensed matter physics or particle physics. This course may not be used to satisfy the 30 cr. hr. minimum requirements for a bachelor of science in physics. Offered occasionally. Prereq: Cons. of dept. ch.

1 sem. hr.
Critical analysis of the original works of scientists who have made significant contributions to Physics. This course may not be used to satisfy the 30 cr. hr. minimum requirements for a bachelor of science in physics. Offered occasionally. Prereq: Cons. of dept. ch.

1-3 sem. hrs.
Independent study of special topics in physics under faculty supervision. Topics selected by students. This course may not be used to satisfy the 30 cr. hr. minimum requirements for a bachelor of science in physics. Offered every term. Prereq: Cons. of dept. ch.

2 sem. hrs.
Independent research under the guidance of physics faculty. The topic may be chosen from any area of physics. Successful completion of the course includes a written thesis on the research and an oral presentation. This course may not be used to satisfy the 30 cr. hr. minimum requirements for a bachelor of science in physics. Prereq: Cons. of a regular physics faculty member and Sr. standing. 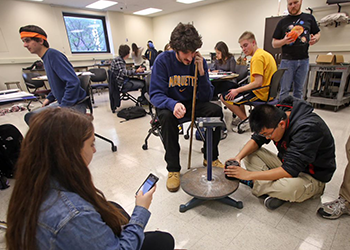