Congratulations to Prof. Julia Azari, who received two awards at the 2019 meeting of the American Political Science Association. These included the award for Best Public Facing Scholarship, presented by the APSA Section on Information Technology and Politics as well as the Founder's Best Paper Award for her co-authored manuscript "The Party Decides (Who the Vice President Will Be)", presented by the APSA section on Presidents and Executive Politics.

Congratulations to Prof. Noelle Brigden, whose book––The Migrant Passage: Clandestine Journeys from Central America (2018, Cornell University Press)––has been awarded a 2019 Yale H. Ferguson Award by the International Studies Association-Northeast. The prize recognizes the recent book that most advances the vibrancy of international studies as a pluralist discipline.

Political Science M.A. student Kyle Hagge is helping to organize a TEDxMarquetteU event on March 30th at 6:30 PM in the Eisenhower Room at Sensenbrenner Hall. "Rooted" will spotlight the work and ideas of individuals from the Milwaukee community, including civic leaders, activists, and entrepreneurs. A podcast episode featuring Kyle Hagge, President Lovell, and others can be found on Soundcloud.

Marquette's Democracy Project––led by Profs. Jessica Rich and Barrett McCormick––helped to bring Standing Rock Sioux Chairman David Archambault to campus as part of Marquette's Mission Week. Archimbault spoke about his activism related to the Dakota Access Pipeline and his efforts to preserve Native Americans' sacred lands. An article about the event can be found here. 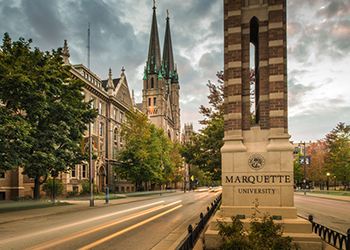