PSYC 1700. Psychology Introductory Statistics Lab (1 credit)
This lab introduces students to computer statistical programs for graphing and analyzing data. It is required for students who take MATH 1700 instead of PSYC 2001 and the two classes should be taken concurrently when possible. Students who take PSYC 2001 should not take PSYC 1700.

PSYC 2101. Introduction to Life-Span Developmental Psychology for Nursing Students (3 credits)
Principles, theories, and research in development. The entire life-span from conception to death will be studied with emphasis on theoretical approaches and empirically obtained data. The effects of genetic, social, and environmental factors on typical development patterns. Offered every term. Counts towards the major in Psychology only for students with double majors in Nursing and Psychology. Prereq: PSYC 1001 or equivalent.

PSYC 2050. Research Methods and Designs in Psychology (4 credits) or PSYC 2050H Honors Research Methods and Designs in Psychology (4 credits)
Scientific methods and their application in psychology with emphasis on the experimental method. May include experimental, quasi experimental, correlational and survey designs, as well as selection and implementation of descriptive and statistical analyses, individual laboratory projects, and preparation of scientific reports. Offered every term. Prereq: PSYC 1001 or equivalent and PSYC 2001.

PSYC 3101. Developmental Psychology: Conception Through Adolescence (3 credits)
Examines the developing human being from conception through adolescence. The concepts, methods, and theories relevant to the study of the developing child and adolescent will be considered. Investigates the major physical, cognitive, social and emotional changes during the phase of the life course, as well as the genetic and contextual influences on development. Offered every term. Fulfills the developmental content requirement for the Psychology major. Prereq: PSYC 1001 or equivalent.

PSYC 3120. Developmental Psychology: Adulthood and Aging (3 credits)
Survey of theory and research in adulthood. Emphasis on adulthood, middle age, and old age. Typical developmental patterns will be analyzed, as will genetic, social, and environmental determinants. Offered annually. Fulfills the developmental content requirement for the Psychology major. Prereq: PSYC 1001 or equivalent.

PSYC 3210. The Psychology of Prejudice (3 credits)
An overview of theory and research on the psychological underpinnings of intergroup intolerance, with emphasis given to racism, sexism and heterosexism. Theories that explain how stereotypes and prejudices form are covered. The experience and impact of being a target of discrimination are considered. Prejudice reduction techniques are reviewed. Offered every term. Prereq: PSYC 2050.

PSYC 3301. Learning and Behavior (3 credits)
A comprehensive survey of methods and findings of classical and operant conditioning. Some introduction to theories of learning. Fulfills the cognitive content requirement for the Psychology major. Offered annually. Prereq: PSYC 1001 or equivalent.

PSYC 3501. Theories of Personality (3 credits)
Discusses the formulation of personality theory, including its purpose and problems. The psychoanalytic, behavioral, humanistic and other theories of personality and their various applications to human behavior are reviewed. Reviews research methods and findings. Fulfills the clinical content requirement for the Psychology major. Offered every term. Prereq: PSYC 1001 or equivalent.

PSYC 3550. Psychology of Gender Roles (3 credits)
Biological, cultural and socialization bases of gender roles; the psychology of women and men. The meaning of gender roles and the consequences for relationships, sexuality, and personal and professional aspirations. The pressure of gender stereotypes and implications for mental and physical health. Offered annually. Prereq: PSYC 2001 or INGS major or minor.

PSYC 3840. Psychology of Happiness (3 credits)
Focuses on the emerging research and theory in positive psychology on the nature of happiness. The determinants and correlates of happiness will be examined, including the role played by love, humor, forgiveness, religion, compassion, and spirituality in creating happiness. Offered occasionally. Prereq: PSYC 1001 or equivalent.

PSYC 4320. Learning and Memory (3 credits)
Examines theories and in-depth critique of research into how people learn, remember and forget. Includes both conscious and unconscious aspects of learning and remembering, the neural mechanisms that serve these processes, and factors that influence whether we remember or forget. Prereq: PSYC 3320 or PSYC 3601.

PSYC 4350. Death and Dying (3 credits)
Review of the psychological literature on death. Social and individual attitudes toward death. Reactions to the anticipation of the death of self and of significant others. Ways of responding to loss and death including grief, mourning, and bereavement. A survey of the various theories of death and suicide. Prereq: PSYC 1001 or equivalent.

PSYC 4720. Psychology of Marriage and Family (3 credits)
Psychological theories and research pertinent to understanding couple and family functioning is covered. Topics vary but typically include fundamental issues such as how intimate relationships develop and change over time, communication, conflict and support in close relationships, and the role of gender in shaping experiences in close relationships. Offered occasionally. Prereq: PSYC 2050 or INGS major or minor.

PSYC 4801. History & Systems of Psychology (3 credits)
The development of psychological thinking from the 17th century to the present. The contributions of Descartes and Newton to Locke and the other British empiricists and, through them, to German mechanism and physio- logical psychology. The influence of Darwin, Freud, behaviorism, Gestalt psychology, and the phenomenological and humanistic movement after World War II. Prereq: PSYC 2050 or senior standing.

PSYC 4820. Concepts and Principles of Behavior (3 credits)
Provides an introduction to learning and the philosophy and science of behavior analysis, including topics which focus on basic principles of respondent (classical) and operant conditioning, as well as single subject research methods. Exposes students to experimental psychology research pertaining to the subject matter of human and animal learning. Prereq: PSYC 1001; PSYC 2001 or PSYC 2001H; PSYC 2050 or PSYC 2050H. (Available as of 6/1/20).

PSYC 4956. Advanced Undergraduate Research (variable: 1-3 credits)
Readings, discussion and application of psychological research under the direction of a Psychology faculty adviser. Students are expected to review the literature on an assigned or negotiated topic and design and propose a specific research project that parallels or expands upon their semester experience. 1-3 semester credits. Course may be repeated for credit. A maximum of six credits of PSYC 4956, 4995, and 4999 combined may be counted as electives toward the minimum requirements for the major. Prereq: Consent of instructor.

PSYC 4956H. Honors Advanced Undergraduate Research (1 credit; 2 semesters = 2 credits)
Readings, discussion and application of psychological research under the direction of a Psychology faculty adviser. Students are expected to review the literature on an assigned or negotiated topic and design and propose a specific research project that parallels or expands upon their semester experience. As an Honors Program course, includes a more intensive research or project component. 1-3 semester credits. Course may be repeated for credit. A maximum of six credits of PSYC 4956, 4995, and 4999 combined may be counted as electives toward the minimum requirements for the major. Prereq: Consent of instructor; admission to Psychology Disciplinary Honors Program.

PSYC 4960. Advanced Undergraduate Seminar (3 credits)
Readings and discussion course designed to provide a high level overview of psychology with an emphasis on selected current topics. Each student will be expected to design and propose, but not necessarily conduct, a specific scholarly project. Offered annually. Prereq: Consent of instructor.

PSYC 4963. Peer Tutoring in Psychology (3 credits)
Work with instructors to assist students in psychology courses; must attend lectures, hold office hours, tutor individual students and conduct exam preview sessions. Assist instructor as otherwise needed. Meet with the director of the program and other tutors to review material and concepts. Prereq: Jr. or Sr. stndg.; 3.35 Psychology GPA. (Available as of 6/1/20).

PSYC 4964. Field Experience in Psychology: Internship (3 credits)
Placement in an applied setting in which the student has the opportunity to observe psychological knowledge, skills, and values demonstrated in one or more professional roles. Requires supervision in the setting. Placement must be directed by a psychology faculty member. Accompanied by seminar, readings, and demonstrated knowledge of appropriate ethical principles. Offered annually. S/U grade assessment. Prereq: Senior standing and consent of department chair.

PSYC 4964. Field Experience in Psychology: Peer Tutor (3 credits)
Placement in a specially selected applied setting in which the student has the opportunity to observe psychological knowledge, skills, and values demonstrated in one or more professional roles. Requires supervision in the setting and direction by the course instructor. Accompanied by seminar with readings, journals and reflections, presentations a term paper and demonstrated knowledge of appropriate ethical principles. Offered annually. Prereq: Senior standing, psychology major, and Consent of department chair.

PSYC 4999. Senior Thesis (3 credits)
Develop an original project under the direction of a psychology faculty adviser. Independently review the literature, develop a question, conduct the research, analyze the results and present the conclusions. A maximum of six credits of PSYC 4999 alone or PSYC 4956, PSYC 4995 and PSYC 4999 combined can apply toward the major. Prereq: PSYC major, PSYC 2050 or PSYC 2050H, Sr. stndg., 3.000 GPA, and GPA of at least 3.500 in Psychology. 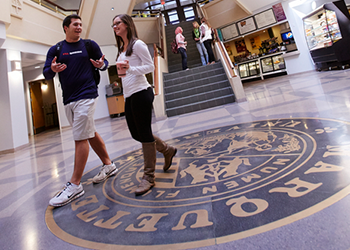