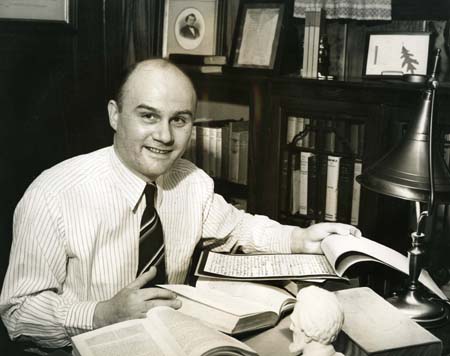 Lester W. Olson was a Wisconsin native with a lifelong passion for the Man from Illinois. At the age of 12, as the nation commemorated the 1809-1909 centennial of Abraham Lincoln's birth, young Olson began building a collection of Lincolniana. Although a man of modest means, Olson eventually amassed one of the largest Lincoln and Civil War collections in the state. For over sixty years Olson gathered books, journals, photographs, documents, engravings, and memorabilia about the 16th president. Local newspapers occasionally published feature stories describing his hobby, sometimes depicting the "Lincoln Room" inside his Whitefish Bay residence. Olson once commented that his avocation not only provided relaxation from his work as a regional sales manager, but also resulted in a "great many friends" and "a better appreciation of my country." 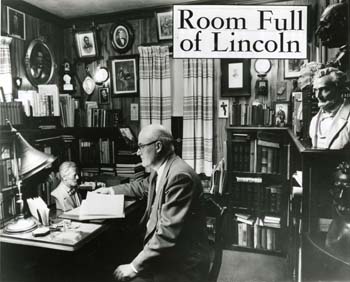 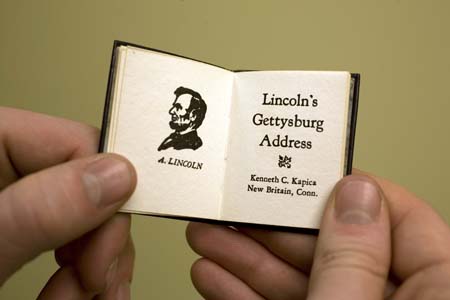 Marquette was fortunate to acquire Olson's collection in the late 1950s, just prior to the centennial of the Civil War. The acquisition assisted faculty such as historian Frank L. Klement, one of the leading Civil War scholars of his generation. The more than one thousand books acquired from Olson strengthened the Libraries' collection. (Lincoln has been the subject of more than 16,000 books!) Artifacts, steel engravings, memorabilia and documents collected by Olson are preserved in the Department of Special Collections and University Archives.

A few select items include an 1860 Lincoln-Hamlin campaign banner, a Lincoln life mask, and a limited edition miniature book of Lincoln's Gettysburg Address. Miniature books, generally less than three inches in size, are popular among collectors and those who desire a smaller edition of a favorite work for practical reasons.

Measuring 35" x 38," the Lincoln-Hamlin campaign banner was used by members of the Wide Awake Club of Farmington, Illinois (today known as Campbell) at a mass meeting of Wide Awakes held in Springfield on August 8, 1860. The Wide Awakes were grassroots marching companies of young men who acted as political police: ensuring that order was kept at political meetings, and serving as escorts to visiting Republican party speakers. These clubs, which are often referred to as the "most remembered feature of the 1860 campaign," originated in Connecticut and spread throughout the northern states. 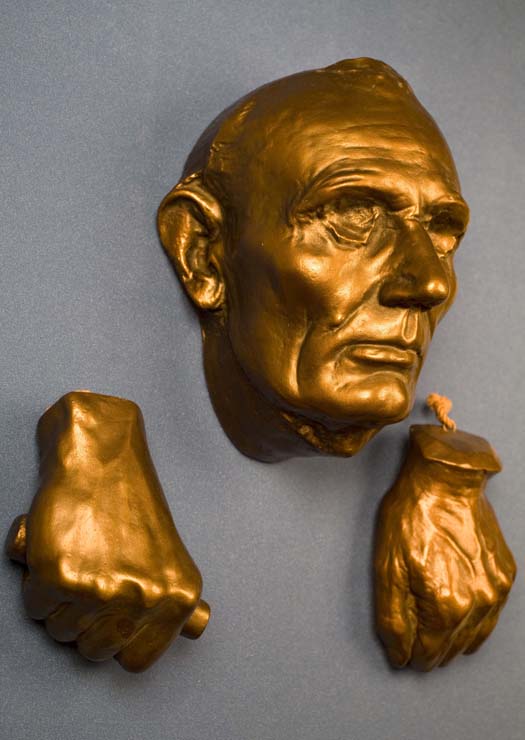 The bronze life mask of Lincoln, one of only two ever made, was molded by American sculptor Leonard W. Volk (1828 - 1895). After completing his studies in Rome, Volk established a studio in Chicago. The artist became acquainted with the future president during the 1858 Lincoln-Douglas debates. In March of 1860 Volk persuaded the presidential candidate to sit for a life mask. Later that year Volk produced casts of Lincoln's hands. These models were subsequently used for numerous statues of President Lincoln, including a life-size statue by Volk in Springfield, Illinois.

Lester W. Olson's enthusiasm for assembling this array of resources into a single location has proven itself to be an important contribution to those interested in researching the life of the 16th president. While Olson pursued his avocation primarily for his own personal enjoyment, the items in his Lincolniana collection continue to be of interest to today's historians.

Questions about the Lester W. Olson Collection can be directed to: Amy Cooper Cary, Special Collections and University Archives