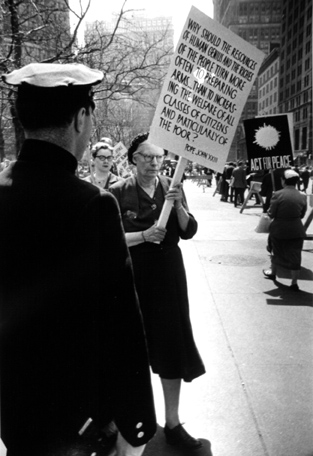 Fifty years ago this month–on April 17, 1959–Dorothy Day underwent the last of 5 arrests for sitting on a park bench in New York City. Her actions were part of a small but significant witness against the nuclear arms race. These documents from our holdings tell part of this story. For more information see the studies by Tracy C. Davis, Dee Garrison, and Guy Oakes.

In 1955, as the the Cold War between the United States and the Soviet Union approached its height, New York State made it a misdemeanor offense to fail to take cover during the nationwide civil defense drill, "Operation Alert." The redoubtable Ammon Hennacy prevailed upon his Catholic Worker colleague Dorothy Day and a small group of other pacifists and anarchists to refuse to participate. Those who pleaded guilty, including Day and Hennacy, pledged "loyalty to God even at the risk of disobedience and subversion to the coercive State" (statement in court, 14 September 1955). Sentences were suspended that year, but the protesters spent a total of more than six weeks in jail in subsequent years, including a month for sitting out the 1957 drill.

With the advent of the '60s, the efforts of mainstream peace groups, such as the newly-formed SANE (Committee for a Sane Nuclear Policy) considerably swelled the ranks of nonparticipants. Almost 2000 joined the Catholic Workers and other pacifists at City Hall Park for the 1961 Operation Alert protest, including a sizeable contingent of mothers pushing strollers or with children in tow. The federal government unceremoniously ended the annual exercise in 1962. 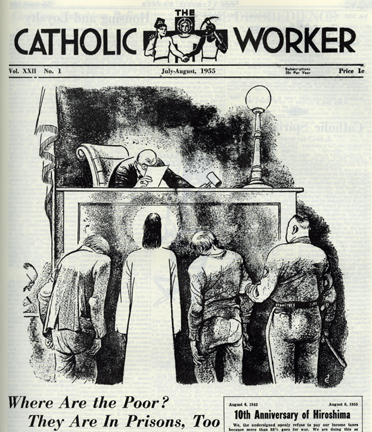 The Catholic Worker used its front page to cover the protests, including this July-August 1955 issue, which contained Dorothy Day's article on the demonstration and a telling illustration by Quaker artist Fritz Eichenberg, a frequent contributor to the newspaper.

The Catholic Worker also featured front page articles about the 1956 and 1957 protests. Also in 1957, the newspaper published two letters Day had written from jail to her fellow Catholic Worker, Charles McCormack.

In 1955 Day wrote about her first arrest in a letter to Jack English, a former member of the New York Catholic Worker community who assumed the religious name of Charles when he entered the Trappist order.

Two weeks before her final arrest in 1959, Day talked about the upcoming demonstration in a letter to Deane Mowrer, a poet who had recently joined the Catholic Worker community. Mowrer faithfully participated in the civil defense drill protests despite failing eyesight.

Questions about the papers of Dorothy Day or the New York Catholic Worker may be directed to:
Phil Runkel, Special Collections and University Archives