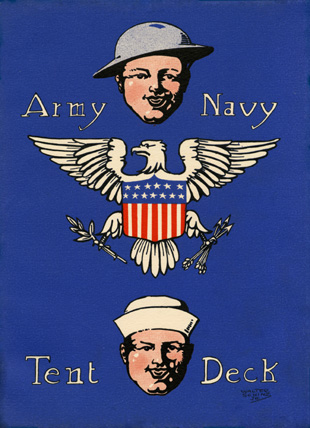 November 11th -- Veterans Day 2008 -- marks the 90th anniversary of the armistice that brought an official ceasefire to the Western Front, ending U.S. involvement in the First World War.

The U.S. entered the Great War in April, 1917, and the resulting war effort impacted the Marquette campus in a variety of ways. Students actively participated in government bond drives; others, including faculty, signed up for the armed forces and the hospital corps; and military-related topics were discussed in many courses. The Marquette Tribune, the "authorized publication" of the Student Army Training Corps, redesigned their masthead to reflect their patriotic support for the war. The newspaper regularly featured articles and updates about Marquette students and faculty serving in the military. 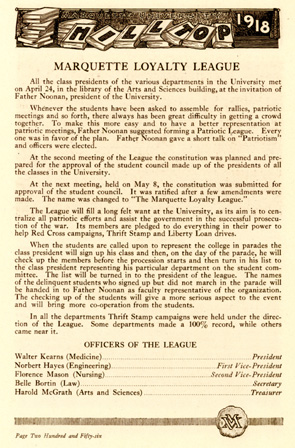 Many students demonstrated their support for the war by joining the Marquette Loyalty League, an organization initiated by university president Herbert C. Noonan, S.J..  According to the 1918 Hilltop, the aim of the Loyalty League was "to centralize all patriotic efforts and assist the government in the successful prosecution of the war."  The Marquette Loyalty League promoted full student participation in government sponsored bond drives, encouraged rationing, and supported many Red Cross activities. 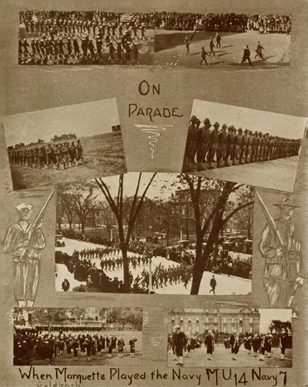 The impact of the war on the Marquette campus is evident in the student yearbooks published during and immediately after the war. The 1918 Hilltop, dedicated to President Woodrow Wilson and "our boys in the service of our country who...are upholding the principles and the honor of Marquette," opened with a tribute entitled "Hilltoppers with the Colors."  This commemorative section featured photographs of Marquette alumni, faculty, and students who were in the armed forces. An honor roll of all those affiliated with Marquette University who were serving in the military was also included. At least twenty seven Marquette women are known to have served in the war, primarily as nurses. 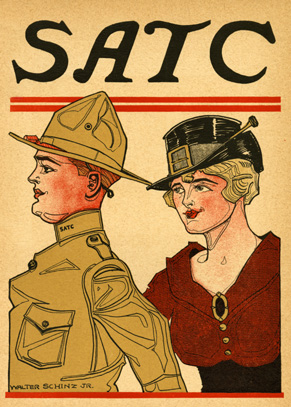 The origins of ROTC programs at Marquette date to the First World War. On October 1, 1918, just six weeks prior to the armistice, the Student Army Training Corps was introduced on campus. Marquette was one of several hundred campuses to host a SATC program, a special training unit of the U.S. Army. The SATC enlisted men who had the opportunity to "continue their educations while receiving an introduction to military life." In addition to pursuing their college degrees, recruits were expected to complete basic training and formal military coursework, in exchange for room, board, and a private’s pay of $30 per month. Military uniforms for the young recruits did not arrive until December, more than a month after the official armistice. The devastating influenza epidemic of 1918-1919 hastened the disbanding of SATC. The military discharged all recruits from crowded on-campus military barracks prior to the 1918 Christmas holiday. 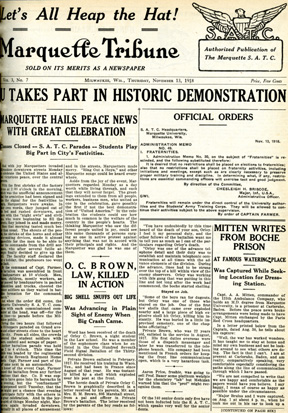 The November 13, 1918 edition of the Marquette Tribune reported the armistice celebration in Milwaukee, with headlines such as "U Takes Part in Historic Demonstration" and "Marquette Hails Peace News with Great Celebration." The lead article recounted how "Mad with joy Marquetters invaded Milwaukee downtown streets Monday to celebrate the United States and allied victorious peace, over the central powers." Students and faculty looked forward to returning to a more traditional campus environment. 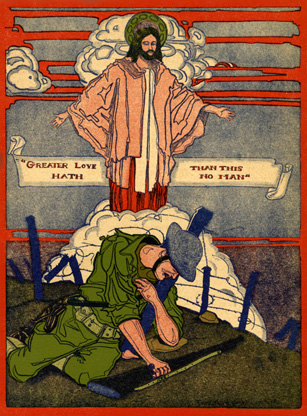 Released seven months after the armistice, the 1919 Hilltop carried a more somber and reflective tone. Dedicated to the 24 students and faculty members who lost their lives during the war, the "Gold Star Book" featured a poem entitled "Victory," honoring the "brave warriors of the Gold and Blue." The opening eighteen pages of the student annual presented portraits and obituaries of these Marquette servicemen. An honor roll commemorated all Marquette alumni, faculty, and students who served in uniform and overseas in the Red Cross. Also featured were original color plates designed by student artists. Many of the plates included in the 1918 and 1919 yearbooks were designed by Walter Schinz, Jr. ('20).

Questions about this collection can be directed to:
Michelle Sweetser, Special Collections and University Archives