Exploration and Discovery: A Distinct Collection of Stamps

Exploration and Discovery: A Distinct Collection of Stamps

Philatelists often explain that every stamp tells a story. Although the Marquette University Archives is not a center for philately (the study of stamps and postal materials), several sheets of stamps preserved by the archives offer a method for considering principles and ideals that are central to higher education.

The university's namesake, Père Jacques Marquette, was a French Jesuit priest whose life as a missionary exemplified the principles of discovery and exploration. In 1668 Father Marquette established a mission at Sault Ste. Marie, a travel crossroads for American Indians where the young Jesuit learned of a great western river. In 1673 he was selected by Louis Joliet as an interpreter and companion in the exploration of the Mississippi River. Led by American Indian guides, Joliet and Marquette were the first Europeans known to have visited the site of present-day Milwaukee. 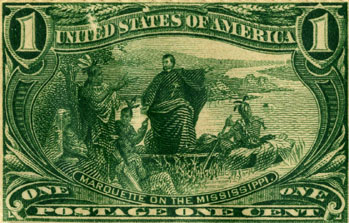 The United State Post Office has issued two stamps commemorating Father Marquette: an 1898 one-cent stamp, and a 1968 six-cent stamp. The 1898 issuance depicted Father Marquette speaking with several Native Americans from his canoe on the Mississippi during his 1673 expedition. The stamp was part of a "Trans-Mississippi Exposition Issue" designed to celebrate the Trans-Mississippi Exposition in Omaha, Nebraska. The stamp, titled "Marquette on the Mississippi," was based on an 1869 painting by Wilhelm Lamprecht. The artist completed the painting to benefit the Christian Art Society in Cincinnati. After passing through several hands the painting, titled Father Marquette and the Indians, was purchased by Rev. Francis X. Weninger. It was donated to Marquette College during the 1882-1883 academic year. The oil painting is prominently displayed in the Raynor Memorial Libraries near the Opus North Bridge on Raynor Library's second level. 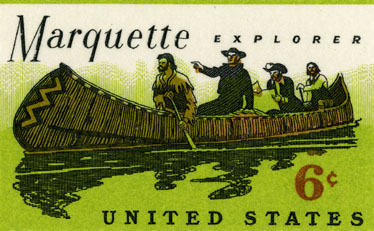 The 1968 commemorative stamp, issued in conjunction with the 300th anniversary of the establishment of the Sault Ste. Marie mission, featured Father Marquette and Louis Joliet in a canoe accompanied by two paddlers. The stamp marked the introduction of a five year observance of the explorer sponsored by the Marquette Tercentenary Commission, a committee established by Congress to honor the missionary-explorer. The stamp's design was unveiled at a ceremony held at Marquette University on April 19, 1968 in the Brooks Memorial Union ballroom. 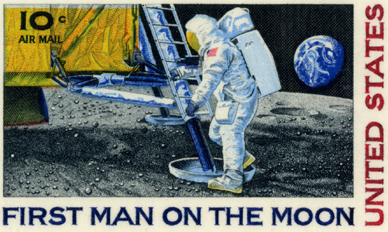 The following year, on July 20, 1969, Neil Armstrong and Edwin "Buzz" Aldrin became the first men to walk on lunar soil, as their copilot Michael Collins orbited above. In honor of their accomplishment, the U.S. Post Office issued a stamp titled "First Man on the Moon." The ten-cent stamp depicted Neil Armstrong taking his first steps on the moon's surface. A complete sheet of these stamps, autographed by the three astronauts, is now held by Special Collections and University Archives.

Marquette University's Board of Trustees recognized that the crew of Apollo 11, like Father Marquette, possessed the "qualities which distinguish all great explorers – a questing spirit, a uniqueness in deed and a consuming dedication to the betterment of civilization." In a ceremony held on November 10, 1969 the men were honored as the first recipients of the Père Marquette Discovery Award.

Questions about this collection can be directed to:
Katie Blank, Special Collections and University Archives