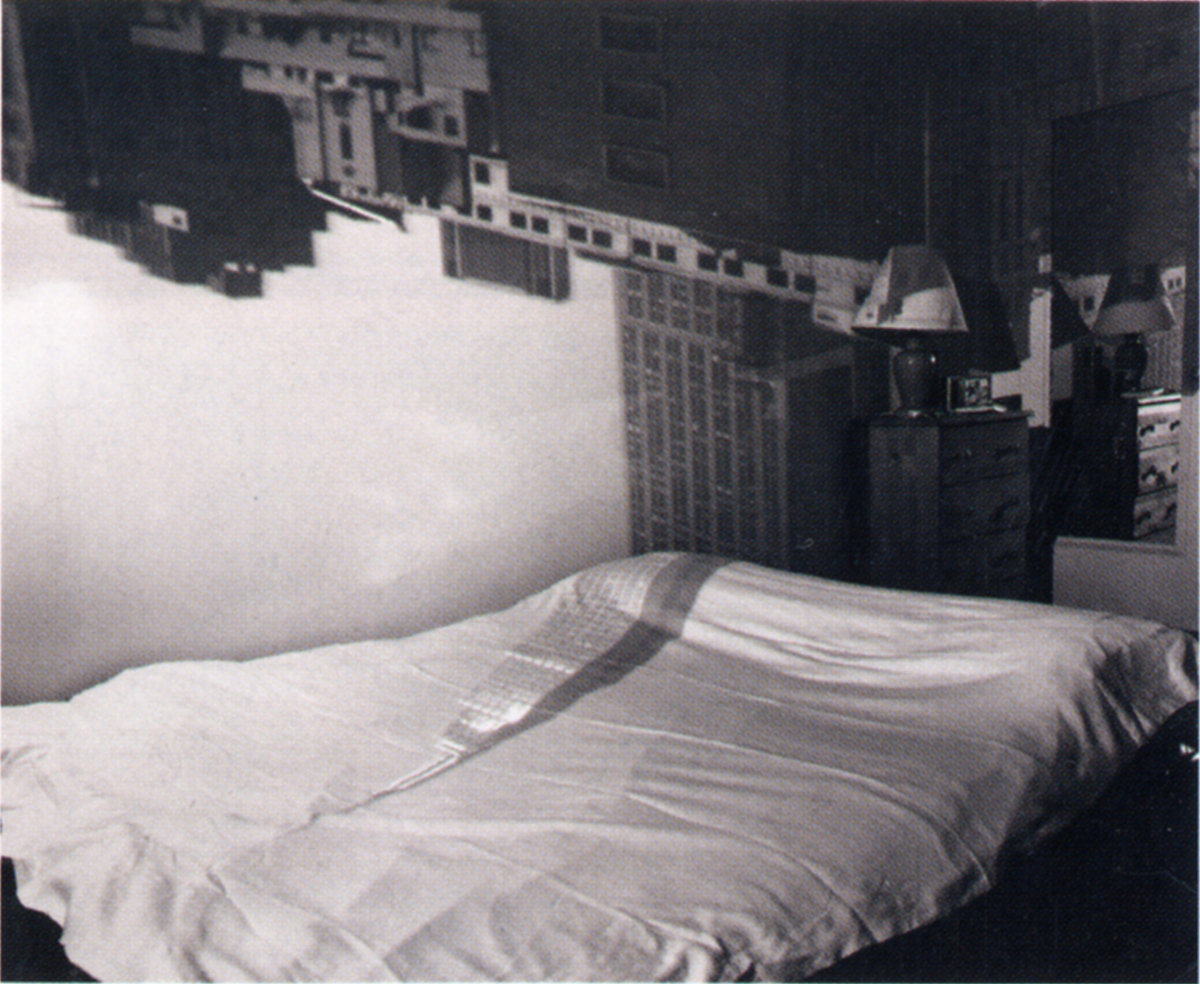 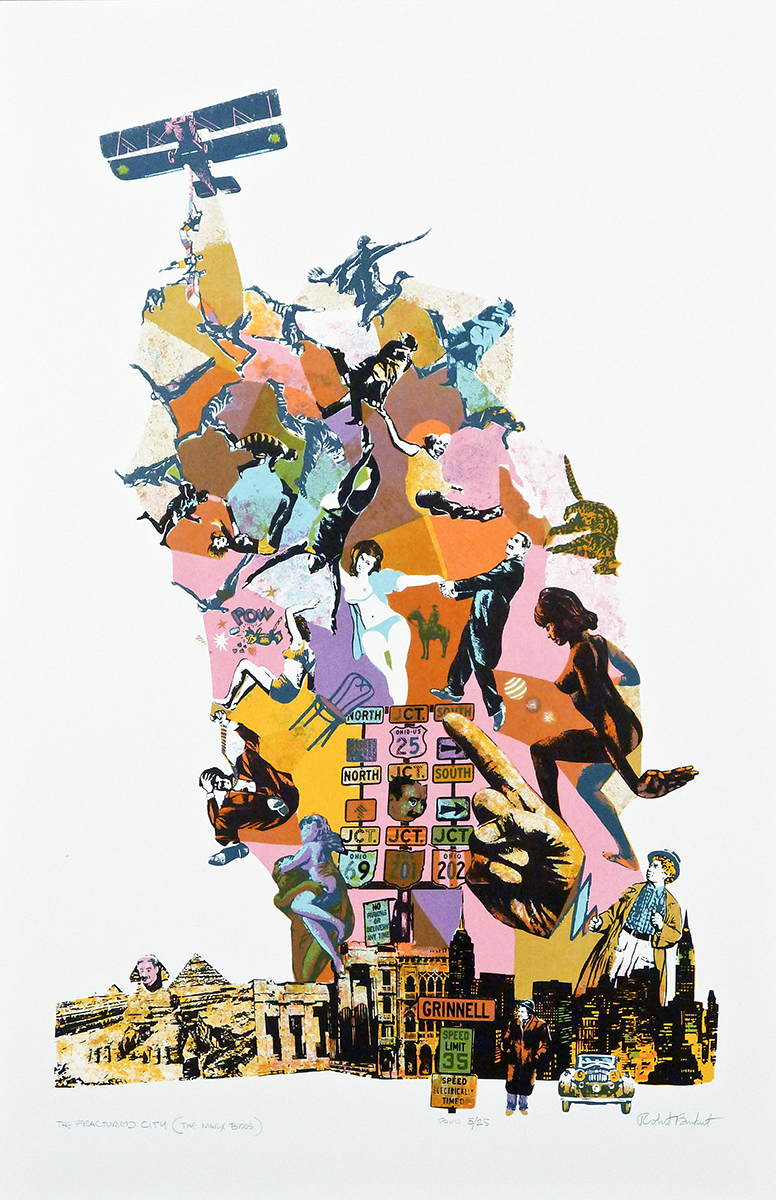 Art has unique ways of transforming familiar scenes and objects into something new and unexpected—and even momentarily unrecognizable. Both now and then, artists have used this aspect of art for a variety of purposes: to commemorate, to critique, and to make us pause and reflect on what we see.

This month, we make the city and city skylines our focus with two prints by two different artists. The Empire State Building in Bedroom is a gelatin silver print by photographer Abelardo Morell, who was born in Cuba but emigrated to New York City with his parents in 1962, when he was 14 years old. Ten years later, the World Trade Center opened, boasting the world’s tallest buildings at the time: 1 World Trade Center, known as the North Tower, which was 1,368 feet high, and 2 World Trade Center or the South Tower, which was 1,362 feet high. Each had 110 floors.

Morell remembers being overwhelmed by skyscrapers when he first arrived in New York, and his depiction of the Empire State Building evokes related feelings. By contrast, The Fractured City (The Marx Brothers) by Robert Burkert offers a riot of color and motion. Burkert was initially from Racine, WI, and many of his early works were influenced by pop art as well as the time he spent drawing comic strips for the Chicago Tribune. His serigraph or silkscreen print captures a patchwork of images from urban life, including road signs and the famous vaudeville comedians, the Marx brothers.

Abelardo Morell is known for employing camera obscura (Latin for “dark room”) techniques to create uncanny photographs in which it seems like the world has been turned upside down. This is one way that he transforms the familiar into something strange. As Morell himself explains:

I made my first picture using camera obscura techniques in my darkened living room in 1991. In setting up a room to make this kind of photograph, I cover all windows with black plastic in order to achieve total darkness. Then, I cut a small hole in the material I use to cover the windows. This opening allows an inverted image of the view outside to flood onto the back walls of the room. Typically then I focused my large-format camera on the incoming image on the wall then make a camera exposure on film.

With Morell’s description of his camera obscura technique in mind, focus on his print and try the following:

*Bonus prompt: Create a camera obscura, photograph what it enables you to see and share your picture(s) with the Haggerty and the Ott via email or on Twitter:  #ArtAsks #HMA #OttWC.

Like Morell, Robert Burkert takes mundane subjects and transforms them to create something new. Instead of using a camera obscura, Burkert remixes images of familiar people and places, mashing them up together to form something new. His interest in comics comes through, as does his knowledge of drawing, printmaking, and painting. His style invites different kinds of looking. Try out one or two below:

*Bonus prompt: Individually, with classmates, or with friends and family, collect 25+ contemporary images, symbols, and/or objects, and then create a contemporary version of The Fractured City (The Marx Brothers). Your work can be digital or physical, and you can share it (or pictures of it) with the Haggerty and the Ott via email or on Twitter: #ArtAsks #HMA #OttWC.

In the spirit of “Now & Then,” which is the theme for Art Asks this semester, consider the period in which Burkert’s print was made. The late 1960s was a tumultuous era in the United States and around the world. The end of the decade ushered in civil rights reforms and countercultural movements that profoundly impacted society. It was a defining time for the twentieth century, much like 9/11 was a defining moment in the twenty-first century. Think about what it means to define an era or a century, and then try the activities below:

Both Morell and Burkert were thinking about the urban environment, cityscapes, and human experience. In his photograph, Morell made the towering New York skyline precious and human-scaled. Burkett’s screenprint created a fractured city skyline–something monumental–out of individual people and cultural touchstones.