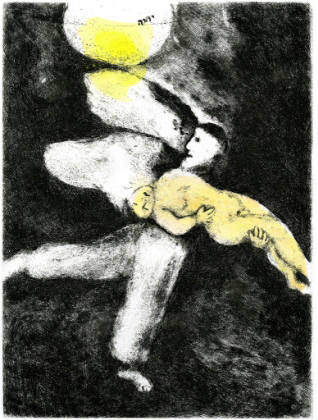 Each work of art welcomes us into a world of the artist’s devising. Paintings and prints welcome us with color and shape as well as line, light, and space. When two or more works appear together, they enter into conversation. Together, their styles and symbolism prompt a dialogue of ideas and emotions in the minds of everyone who views them.

For September 2021, we bring together two prints. Take a moment to study them.

At first, their differences may stand out. The former is firmly set in the twenty-first century. It’s a lithograph based on a painting by James Rosenquist titled The Xenophobic Movie Director or Our Foreign Policy. The lithograph was made in 2011, but the painting was made in 2004, during the first presidential election that took place after the September 11th terrorist attacks. The latter is a hand-colored etching by Marc Chagall. It’s from a mid-twentieth-century series called Bible, which depicts scenes from the Old Testament. This work is Chagall’s response to Genesis, 2:7: “The Lord God formed man from the dust of the earth. He blew into his nostrils the breath of life, and man became a living being.”

Sometimes when we look at a work of art, we trigger one or more of our other senses. This phenomenon is known as synesthesia. Some people have synesthetic responses all the time: they taste sounds or they hear textures. Some people rarely if ever have this experience.

For this prompt, we invite you to imaginatively combine your senses so that you can both look at and listen to this month’s artworks.

Next, shift gears and spend a couple of minutes imaginatively listening to the print you chose. What do you hear? Sounds or music? Individual words or phrases? Whole sentences or dialogue among objects or colors? Or something else?

Spend one minute sharing “what you heard” on Twitter: #ArtAsks #HMA #OttWC.

Often, we talk about looking at art in contrast to reading written and printed works. What happens if we try to read James Rosenquist’s lithograph, The Xenophobic Movie Director or Our Foreign Policy?

Hints: Longhorn skull (possible allusion to President Bush’s home state of Texas), American flag (patriotism, but instead of flying the flag is used to cover or conceal), tree stump (the remnant of something that has been razed, or perhaps an allusion to President Bush’s oft-criticized activity of clearing brush while on vacation at his Crawford, TX ranch), numbers, golf stance (a leisure activity, but also a reference to “teeing” up, meaning preparing for imminent action), light bulb (an idea).

What happens if, similar to Prompt 2, we try to read Chagall’s etching, Creation of Man?

Both Rosenquist’s and Chagall’s prints contain references to G-d as Creator. Christianity as well as Judaism and Islam are monotheistic, Abrahamic faiths, meaning they share foundational texts that tell the story of Abraham.

September 11, 2021 marks the 20th anniversary of the terrorist attacks that took place in the United States on 9/11 in 2001. In the aftermath of that event, many people turned to their faith for immediate solace as well as long-term support. Religion and religious extremism were also associated with 9/11, including not only the attacks themselves but also both personal and collective responses to them. Across the US, interfaith services contrasted sharply with the rise in hate speech and hate crimes committed against Muslims.

In the spirit of “Now and Then,” which is the Art Asks theme this semester, try one or more of the following exercises:

Set a timer for 5 minutes and write out your thoughts. Repeat this activity for as long as you like, and feel welcome to share what you write with the Haggerty and the Ott: #ArtAsks #HMA #OttWC.