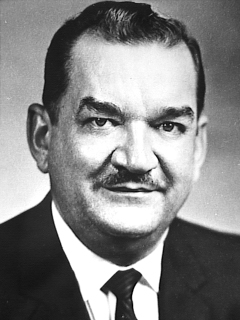 Clement John Zablocki was born in Milwaukee, WI., November 18, 1912; Ph.B., Marquette University, 1936; taught high school in Milwaukee in 1938 and 1939; organist and choir director 1932-1948; member of the State Senate 1942-1948; chairman of the Democratic State Convention in 1948; delegate, Democratic National Conventions, 1952, 1956, 1960, 1964, and 1968; was an unsuccessful candidate for the office of city controller of Milwaukee in 1948 and for the senatorial nomination to fill a vacancy in the United States Senate, 1957; United States delegate to the fourteenth session of the United Nations General Assembly in 1959; elected as a Democrat from Wisconsin's Fourth Congressional District to the Eighty-first and to the sixteen succeeding Congresses, serving from January 3, 1949, until his death December 3, 1983; chairman, Committee on International Relations (Ninety-fifth Congress), Committee on Foreign Affairs (Ninety-sixth through Ninety-eighth Congresses).

Adapted from biography in Memorial Services Held in the House of Representatives and Senate of the United States, Together with Tributes Presented in Eulogy of Clement J. Zablocki, Late a Representative from Wisconsin (Washington: US. Government Printing Office, 1984), vii.