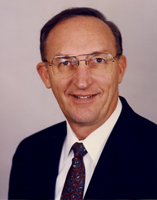 Tobias (Toby) Anton Roth was born in Strasburg, Emmons County, North Dakota on October 10, 1938. He graduated from St. Mary’s High School, Menasha, Wisconsin in 1957 and then attended Marquette University, Milwaukee, Wisconsin, graduating with a BA degree in 1961. Roth served in the United States Army Reserve at the rank of Lieutenant from 1962 to 1969, and, in his private life, established a professional career as a realtor. A Republican, Roth was elected to the Wisconsin State Assembly in 1972 and served until 1978. In that year, Roth ran for Wisconsin’s 8th Congressional District seat, defeating the incumbent Democrat and Roman Catholic priest, Reverend Robert Cornell. Roth was re-elected eight consecutive times, serving in the United States House of Representatives from 1979 until 1997.

During his time in Congress, Roth acquired a reputation for expertise in the areas of Banking, Trade, and Tourism. In 1988 Roth took up the cause of Lee Mirecki, a young Wisconsin sailor who had died in a U.S. Navy training exercise. Roth’s tenacious investigation led to significant reforms in Navy training practices. In the early 1990s, during the last few years of Roth’s Congressional service, he received widespread attention for championing English as the official language of the United States.

On March 4, 1996, Congressman Roth announced from his Appleton office that he would not seek re-election to Wisconsin’s 8th Congressional District.