The Duty of Delight: The Diaries of Dorothy Day 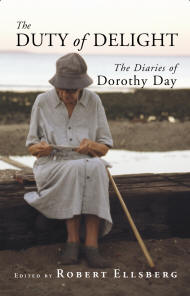 April 2008--The Duty of Delight: The Diaries of Dorothy Day, edited by Robert Ellsberg, has just been issued by Marquette University Press. Publication of this first of a two-volume documentary editing project coincides with the 75th anniversary of The Catholic Worker newspaper, which Day founded along with Peter Maurin. Day's original diaries, spanning the years 1934-1980, are in the Dorothy Day-Catholic Worker Collection of the Marquette University Archives.

Dorothy Day is widely regarded as the most influential lay person in the history of American Catholicism. She was proposed for sainthood in 1983 and the Vatican officially accepted her cause for canonization in 2000 when it bestowed upon her the formal title, "Servant of God." Day's diaries were closed to all researchers until November 29, 2005, the 25th anniversary of her death. According to Ellsberg, when the diaries began in 1934, "the Catholic Worker was becoming a movement; the paper's circulation was steadily climbing and new houses [of hospitality] were emerging around the country." Day continued to journal until a few days before her death in 1980, reflecting on the changing political and economic times, from the Depression to the Vietnam War, and describing her own personal struggles, relationships and travels. Throughout, she continues a dialogue with God, connecting every aspect of her life with her deep spiritual devotion.

Students of Dorothy Day's life and spirituality will find this book essential to their studies. Ellsberg concludes the book's introduction by saying, "These diaries provide a unique window on [Day's] life, and on the witness of a woman for whom, in the end, everything was a form of prayer." This project was made possible with generous financial assistance from Marquette's Edward D. Simmons Religious Commitment Fund. Published by Marquette University Press, the 669 page book lists for $42 and may be purchased directly from MU Press by telephone (800-247-6553) or online ordering. Copies are available in the Libraries' collection and Special Collections.

Robert Ellsberg, publisher and editor-in-chief of Orbis Books, spent five years (1975-1980) at the New York City Catholic Worker community, editing the newspaper and learning from Dorothy Day. Ellsberg graduated from Harvard College with a degree in religion and literature and earned a Masters in Theology (ThM) from the Harvard Divinity School. He is the author and editor of several books, including, By Little and By Little: The Selected Writings of Dorothy Day, Blessed among All Women: Women Saints, Prophets, and Witnesses for our Time, and All Saints: Daily Reflections on Saints, Prophets, and Witnesses of Our Time. Currently, Ellsberg is editing a second volume of this project encompassing selected letters of Dorothy Day.

The Duty of Delight is receiving wide coverage and reviews from media around the world. Here are some recent stories with hotlinks: