"Catholic ladder' is a general term given to pictorial catechisms that featured vertical sequences of pictures as pathways to Heaven. They transcended barriers of language and culture and closely followed the teaching styles of Saints Peter, Paul and Augustine by presenting Christian beliefs as concise and tangible glimpses of God in world history.

The ladders originated in North America from the hand-crafted sticks used by 17-18th century Jesuits and Native American faithful and evolved into mass-produced charts used to evangelize in oral and visual societies worldwide. As they developed, these aids increasingly used sequences of pictures with vivid colors and detailed graphics from the Bible and captions or companion narratives. Father Francis Norbert Blanchet created the Catholic ladder in the present-day state of Washington in 1839. It began as a stick carved for Native American audiences, which he quickly transposed to paper and revised continuously. He published several versions (e.g.1839-1843, 1856), which grew gradually in size and complexity from 1843 to 1860.

Pierre-Jean de Smet, S.J., learned about the Catholic ladder from Blanchet. He then published his own Indian Symbolic Catechism in 1843, which became the first ladder to be distributed widely across North America.

The development of related aids by 19th-century Native American, Protestant, and Orthodox authors underscored the effectiveness of Catholic ladders. In turn, these non-Catholic variations encouraged Catholic authors to upgrade their ladder catechisms. Kenekuk, a Kickapoo Indian prophet, introduced prayer sticks in Illinois, Indiana, and Kansas after 1812, which imitated ones created earlier by Jesuits and their native converts. Protestants in present-day Idaho, Oregon, and Washington created ladder catechisms in the 1840s. (The Oregon Historical Society website displays the only Protestant copy known to survive.) Archpriest Simeon Nishnyakov published an untitled Orthodox chart in Moscow in 1892, which was used in Alaska.

During the first generation of use, Catholic ladders facilitated the rapid training of catechists in newly evangelized communities. This enabled them to engage their peers and children when missionaries often lacked the necessary linguistic and cultural skills. In subsequent generations, ladders continued to empower native catechists and parents by facilitating the use of visual and oral methods.

[Nicholas] Black Elk (1866-1950) was an Oglala Indian medicine man from South Dakota who became a Catholic catechist and taught with a Lacombe ladder for many years. Some scholars believe that Black Elk's use of the "two roads," as shown here, influenced his interpretation of his childhood vision, which he described in his book, Black Elk Speaks (1932).

The use of ladder catechisms declined during the 20th century.  As early as 1881, the bishops of Oregon and Washington banned their use in favor of the prevailing English language catechisms. Nonetheless, teachers who recognized the effectiveness of pictorial catechisms among Native American children sought to continue their use as in this 1941 catechism class in Washington state.

With encouragement from the bishop of Calgary, Alberta, Maurice Goutier created Come to Me... I am the Way in 1984, which is a contemporary version of Lacombe's ladder. In the accompanying narrative Goutier encouraged users to make their own narratives and adaptations.  Today, some Bible-study teachers have had students create and present their own ladders, which allows them to express their own personal and cultural perspectives. 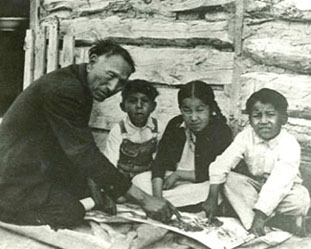 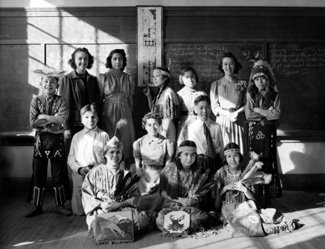