The Marquette University seal consists of two parts enclosed within a blue circular band that includes the year the university was founded, 1881.

The upper half bears the motto Numen Flumenque (meaning “God and the [Mississippi] River”) and the coat of arms of the Loyola family in honor of St. Ignatius of Loyola, founder of the Society of Jesus.

The gold and red diagonal bands honor seven heroes from the House of Onaz, the maternal side of Ignatius’ parentage, which distinguished itself in battle. The wolves symbolize the generosity of the House of Loyola — even the wolves found something in the kettle on which to feast.

The lower half depicts Father Jacques Marquette, the 17th-century Jesuit missionary and explorer after whom the university is named who lived among various Great Lakes tribes for nine years while seeking to win their commitment to the Gospel. The Miami guide represents the many Miami guides who accompanied him on his explorations of the western Great Lakes and the Mississippi River system.

Wilhelm Lamprecht painted Pere Marquette and the Indians more than a decade before the university’s founding. It depicts a member of the Illini, or Illinois Confederacy, offering guidance to Father Marquette and two Miami guides, who led him from the Wisconsin River to the Mississippi River. The female figure represents the Virgin Mary, who is repeatedly invoked in Father Marquette’s travel journals. The painting presents a romantic vision of reciprocity and dialogue among members of the Illini and Miami tribes and Father Marquette.

The Marquette logo, revised in 1995, comprises the words "Marquette University" and a graphic representation of the Marquette Hall tower.

In September 2002, Marquette adopted the tagline "Be The Difference." The university aims to form women and men for others and help students and the entire Marquette community become the kinds of leaders who will make important contributions — who will Be The Difference in their communities.

The athletics monogram was designed for the express use of the Intercollegiate Athletics and Recreational Sports. The interlocking "M" and "U" depict the teamwork that is a hallmark of Marquette athletics, and the classic styling of the letters indicates the long history of athletics excellence at the university. And, most important, the glowing highlighted letters portray the promise of a shining future for our teams and fans. 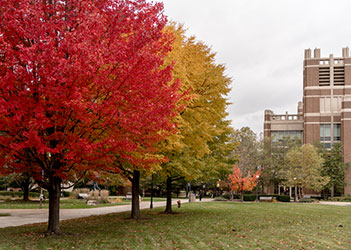