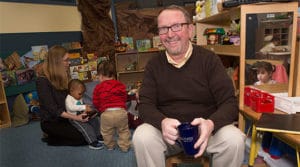 Fox has been at Marquette since 1982, and during that time he has worked to engage members of the community on early childhood mental health treatment. He has not only become a national leader on the topic but has also developed Early Pathways, a program that is seen as a model for treating the issues experienced by young children living in poverty.

"Being acknowledged by one's peers for research contributions is the highest honor one can hope to achieve in an academic career," Fox said. "I am gratified to have received this award and will remember it long after my career has ended."

The Lawrence G. Haggerty Faculty Award recognizes a faculty member who has demonstrated scholarly distinction and an all-encompassing belief in excellence.