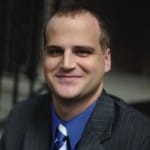 Troyer has been at UWM since August 2013 where, in his leadership role, he was responsible for executing data-driven enrollment management strategies with an emphasis on promoting the university's dual mission of research and access. Prior to that, he was the senior associate director of undergraduate admissions at the University of Kentucky, where he previously served in a variety of progressive enrollment management roles.

"Marquette has a unique and powerful mission that resonates throughout the country and around the world, and I am honored to join the Marquette family as the next dean of admissions," Troyer said. "The admissions team at Marquette is an incredibly impressive, talented and hard-working group. I am excited to join them, and I am also eager to work collaboratively with colleagues in enrollment management and around campus to help Marquette achieve its enrollment goals."

Troyer earned a bachelor's degree in communication and a master's degree in higher education, both with honors, from the University of Kentucky. He lives in Whitefish Bay with his wife, Claire, and two sons, Charlie (4) and Henry (3).