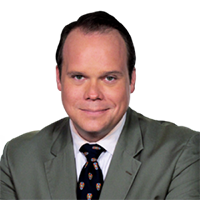 MILWAUKEE — Chris Stirewalt, politics editor at Fox News Channel, will discuss the recent midterm elections and sign copies of his new book, Every Man a King: A Short, Colorful History of American Populists, on Monday, Dec. 3, at 6 p.m. in the Eisenberg Reading Room on the third floor of Marquette University's Sensenbrenner Hall, 1103 W. Wisconsin Ave., Milwaukee. The event is sponsored by Marquette's Diederich College of Communication.

Stirewalt joined Fox News Channel in July 2010 and serves as the politics editor based in Washington, D.C. He authors the daily Fox News Halftime Report political news note and co-hosts the popular podcast, Pireno & Stirewalt: I'll Tell You What.

Prior to joining Fox News Channel, Stirewalt served as political editor for the Washington Examiner, where he wrote a twice-weekly column and led political coverage for the newspaper. He also served as politics editor at the Charleston Daily Mail and West Virginia Media. He began his career at the Wheeling Intelligencer in West Virginia.

Copies of Stirewalt's new book will be available for sale prior to the event.

This event is open to the public. Register for the event online.