MILWAUKEE — Jeannie and Jim Gaffigan, a wife-husband team who have collaborated on a wide variety of comedy projects, will serve as Marquette University's Commencement speakers on Sunday, May 20. As part of the university's graduation ceremony, they each will receive an honorary Doctor of Humane Letters degree. Jeannie is an alumna of Marquette, graduating from the Diederich College of Communication in 1992.

"The joy and excitement of Marquette's commencement will be even greater with the addition of Jeannie and Jim Gaffigan to our Class of 2018," said Michael R. Lovell, president of Marquette University. "We know the Gaffigans best for their humor, but I'm sure we'll also learn from their insights and humility that through their Catholic faith they have a foundation for their relationship that holds their family together through good times and very difficult times."

Marquette alumnus David A. Straz, Jr., a 1965 graduate of the College of Business Administration, will receive an honorary Doctor of Laws degree as part of the ceremony. Straz is a banking entrepreneur, internationally respected philanthropist and patron of the arts. He has served as Ambassador at Large and Honorary Consul General from Liberia and Honduras to the U.S., and has played a key role in U.S.-Cuba relations. Much of his international philanthropy work has focused on education. He is a past recipient of the "Humanitarian of the Decade" award from the College of West Africa.

David was named Marquette's Alumnus of the Year in 1999. His wide-ranging influence at Marquette can be seen in his support for critical campus facilities — two buildings are named after him, David A. Straz, Jr. Tower, a residence hall with offices and recreational facilities, and David A. Straz, Jr. Hall, home of the College of Business Administration --- and academic and cultural programs such as the Aspin Center and the Haggerty Museum of Art. 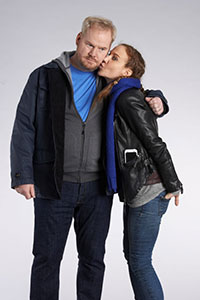 The Gaffigans, who have been referred to as "comedy's quietest power couple" by Vanity Fair magazine, live in Manhattan with their five children. The couple recently ended their critically acclaimed semi-fictitious television show, "The Jim Gaffigan Show," after two seasons. The series was written by Jim and Jeannie, who both also served as executive producers and showrunners. Jim's upcoming sixth comedy special, "Noble Ape," was executive produced and directed by Jeannie. It will be available around the world on July 17.

Jeannie is an actress, producer, writer and philanthropist. In addition to her collaboration with Jim on television, book and live comedy tour projects, she recently co-developed, directed and was an Executive Producer on Jim's Netflix comedy special "Cinco." Jeannie was the founder and executive director of "Shakespeare on the Playground," a not-for-profit theater company that produced Shakespearean plays with inner-city teenagers with a focus on literacy and production skills. She and Jim have been open in sharing their family's challenges during a recent health scare, as she recovered from a brain tumor that was discovered in late 2016.

Jim is a three-time Grammy-nominated comedian, actor, writer and producer whose unique brand of humor largely revolves around fatherhood and his observations on life. Both of his books, "Dad Is Fat" and "Food: A Love Story," were featured on the New York Times Bestseller list. He takes on a dramatic role in Entertainment Studios' recently released film "Chappaquiddick." He has a total of 12 films that have been released or are currently in production this year. Jim also is a product of Jesuit education, graduating from Georgetown University in 1988.

Marquette's Commencement ceremony will be held at 9:30 a.m. on Sunday, May 20, at the BMO Harris Bradley Center. Media interested in attending the ceremony should contact Chris Jenkins, associate director of university communication.