MILWAUKEE — Andrea Schneider, professor at Marquette University Law School, has been named the first director of the university’s new Institute for Women’s Leadership. Dr. Jean Grow, professor of strategic communication in the Diederich College of Communication, and Dr. Jennica Webster, associate professor of management in the College of Business Administration, will serve as co-directors with help from Sasha Parsons Waters of Marquette’s Women’s Innovation Network.

The IWL’s mission is to advance women’s leadership locally and globally through pioneering research, innovative programming and collaborative engagement.

“I am extremely honored to be the first director of the Institute for Women’s Leadership and to help set the foundation for the research that the institute can accomplish,” Schneider said. “We are all are eager to help enhance leadership and career development programming serving women on campus and in the community while encouraging cutting-edge research to influence the national discussion on gender inequality.”

Dr. Jeanne Hossenlopp, vice president for research and innovation, said the institute will be an important contributor to the continued growth of campus research to address critical societal needs, as well as Marquette’s commitment to creating an inclusive culture of innovation.

About the leadership team

Schneider joined the faculty at Marquette in 1996. She teaches alternative dispute resolution, also known as ADR, as well as negotiation, ethics and international conflict resolution. She is also the director of the nationally ranked ADR program at Marquette Law School. Schneider is the author or co-author of numerous books, book chapters and articles in the field of dispute resolution including negotiation and gender. In 2016, she gave her first TEDx talk, Women Don’t Negotiate and Other Similar Nonsense. Most recently, she was named the 2017 recipient of an American Bar Association Award for Outstanding Scholarly Work. Schneider gives negotiation trainings at universities, corporations, law firms and court systems around the world.

Grow, who previously worked in the advertising industry, came to Marquette in 2008. She is a renowned scholar whose research addresses gender bias in advertising, and the underrepresentation of women in advertising and creative departments worldwide. She has been published extensively and is on the editorial board of Advertising & Society Quarterly —a scholarly journal devoted to advertising and its relationship to society, culture, history and the economy. She is also co-author of the book “Advertising Creative: Strategy, Copy and Design.” 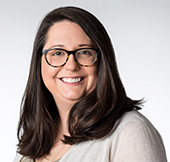 Webster began at Marquette in 2010. During her time at the university, she has served in a number of leadership roles including on academic senate and faculty council, as well as the June and Herman Loebl Women Business Leaders Speaker Series. Her research interests center on gender, diversity and underrepresented groups in the workplace. She has been published widely in leading academic journals andis a regular a speaker at national and international conferences such as the Academy of Management and the Society for Industrial and Organizational Psychology. In addition to her research and teaching, she has served as a consultant to several organizations ranging from Fortune 500 companies, like Dow Corning, to nonprofit organizations such as the YMCA.

Waters, who joined Marquette in 2017, has worked to establish research-based programming for the Women’s Innovation Network and the Women’s Colleagues Program at Marquette. She focuses on creating inspirational events and professional development opportunities for women, minorities and others underrepresented in innovation and entrepreneurship.

“Gender equity and inclusive representation in the workforce and education at all levels are critical topics both nationally and within our campus community at Marquette,” Marquette President Michael R. Lovell said. “I am personally committed to raising the profile of female leaders on campus and ensuring we have the right support systems and leadership development opportunities available for emerging women leaders, and now we have an institution-wide commitment in the new Institute for Women’s Leadership.”

More about the Institute for Women’s Leadership

Announced by President Lovell at his fifth presidential address in January, the Institute for Women’s Leadership builds upon the university’s historic role as the first co-educational Catholic university in the world beginning in 1909. The creation of the Institute for Women’s Leadership was made possible by a generous $5 million gift from the Thomas J. Rolfs Family Foundation. The institute is overseen by Marquette’s Office of Research and Innovation.

A kickoff event for the IWL will be held Oct. 3. More information about the event is forthcoming.