Photo/Video Advisory: Marquette Commencement is May 19 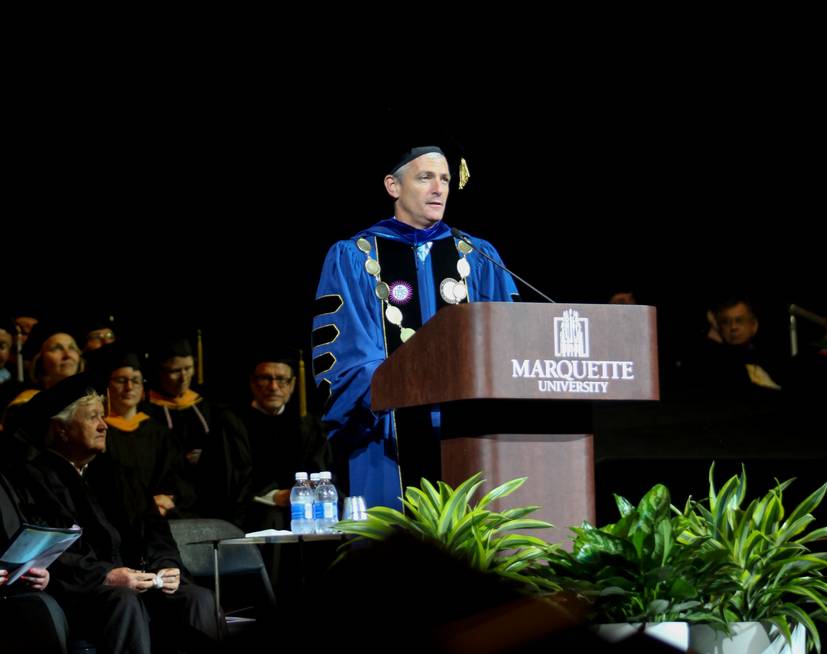 David Brooks, the New York Times best-selling author and political commentator, will serve as Commencement speaker. He is an op-ed columnist for the New York Times, which he joined in 2003, and is a frequent commentator on “PBS NewsHour,” NPR’s “All Things Considered” and NBC’s “Meet the Press.” Brooks formerly served as senior editor at The Weekly Standard and was a contributing editor at Newsweek and The Atlantic. He will receive an honorary doctor of letters degree.

This year's student speaker is Jacob Zelinski, the first-ever recipient of the James Foley Scholarship, who will receive his bachelor’s degree in public relations and writing-intensive English. After graduation, Zelinski will join the alumni volunteer corps at the University of Detroit Jesuit High School—his alma mater.

Photographers are welcome to capture b-roll and still images freely in an unobtrusive manner. A mult-box will be available to broadcast outlets for audio.

The following graduates are available for interviews this week. It may be easier to find time with them during the week instead of on Sunday. Contact Marquette's Office of Marketing and Communication to arrange a day and time:

Nadiya Choi. Nadiya is a biomedical sciences major who will attend the Marquette University School of Dentistry as the first completely deaf student ever admitted. She was diagnosed as borderline severely hearing impaired/deaf shortly after preschool and credits a wonderful support system which shaped her educational trajectory. She has embraced the mission and the call to “Be the Difference.” Her future plans are to open a dental practice that caters to both the hearing and deaf communities while seeing to the needs of patients with hearing loss to ensure they have an advocate for their oral care.

Djdade Denson. Djdade is a Milwaukee native and grew up in the 53206 ZIP code which, statistically, is the most incarcerated ZIP code in the United States. He credits his success to his parents’ strong foundation. He is a member of the Marquette track and field team and is graduating with his degree in environmental engineering.

Anya Lei Koza. Anya was adopted from China and raised by a single mother in the Chicago area. She is the Klinger College of Arts and Sciences’ Undergraduate Scholar of the Year, graduating with degree in biochemistry and molecular sciences and a minor in Africana studies. In addition to her studies, she has been active in on-campus research and community service projects through Aurora Sinai and the Gesu Parish meal program. Anya is also an accomplished dancer, having been involved in a pre-professional ballet program while serving as treasurer and on the executive board for Pure Dance Marquette for two years.

Aliya Manjee. Aliya will graduate from the Marquette Law School on Sunday and has already accepted a position as a staff attorney with the U.S. Ways and Means Committee, working for Marquette alumnus Brandon Casey (Law ’09). Aliya is a native of Brookfield, Wisconsin. She completed her undergraduate degree at Marquette and has held law clerk positions with Ways and Means in the past, as well as with the Wisconsin State Legislature.

Angela Masajo. Angela is graduating with a master’s degree in speech pathology. She moved to the United States from the Philippines when she was nine years old and became a U.S. Citizen in November 2018. She had been a permanent resident but made the decision to pursue citizenship. See more of her story, in her own words, here.

Ryan Serfas. Ryan is completing his undergraduate degree in engineering and will join the Jesuits after graduation. He is the second engineering grad in as many years to choose that path, following Justin Prom. The two of them were among three Marquette students honored as WISN’s Person of the Week for their actions on a spring break trip to the Appalachian trail. For that story, click here.

Efraín Torres. Efraín stood out as an undergraduate student for his research work. He has worked in the Integrated Neuroimaging Lab, where his work resulted in mapping the cerebellum for the first time using an electroencephalogram. He is also working in the Department of Biophysics at the Medical College of Wisconsin on the development of AI software to automate MRI processing techniques. He’s already been published and delivered several conference presentations. He was recognized with a NSF Graduate Research Fellowship in 2019.

For assistance the morning of Commencement, please contact any of the following: