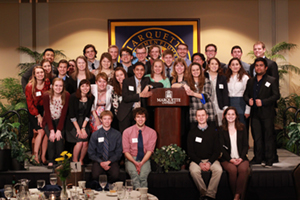 Chuck, who served as the chair of Marquette’s Board of Trustees from 2012-14, graduated from the Opus College of Engineering in 1989; Karen in 1990.

“This significant gift toward Innovation Alley programming will inspire us to reimagine education in the classroom as well as in the workplace and extend far beyond our campus and across our region,” President Lovell said.

In addition, President Lovell highlighted how often students, alumni, parents and friends connect with the university through basketball. “If there are more passionate Marquette basketball fans than the Swobodas, and especially Chuck, I haven’t met them,” he said. “He was passionate as a student, and I don’t think his enthusiasm has dimmed since. With this gift the Swobodas are further reinforcing the foundation of a great Marquette program.”

Innovation Alley and Opus College of Engineering gift
Created in 2014 by Opus Dean Kristina Ropella, Marquette’s Opus College of Engineering has a nationally recognized, award-winning leadership development program called Engineers in the Lead, or E-Lead. The Swobodas will dedicate $1 million of their gift toward Innovation Alley programming to immediately double the size of the three-year leadership program. In fall 2019, the program will consist of 20 engineering students and 20 students from disciplines across the university. The 40 students will begin as a cohort and a new set of 40 students will follow each additional year.

“While we often think of technology when discussing innovation, it is people who provide the critical spark that drives innovative thinking,” Chuck Swoboda said. “Marquette has a distinctive heritage when it comes to developing mission-driven, ethical leaders who work to find solutions to the world’s most pressing problems.”

In January 2019, President Lovell, Chuck Swoboda and Ropella hosted Innovation Alley visioning sessions with industry leaders from across the region.

“Without question, the number one theme that arose was developing an influx of innovation leaders,” Ropella said. “Shaping our strategy around the people was a natural starting point for our Innovation Alley vision. Too often, leadership development is left up to chance. At Marquette, we feel called to intentionally and ethically prepare people to think and act differently and leave their manual at the door.”

In addition to developing more leaders through E-Lead, Marquette’s Innovation Alley will focus on engaging industry and creating new opportunities for students who have not previously had access to programs that promote innovative thinking and collaboration. The university has launched a dedicated website that outlines its vision, which includes a physical space in a future phase.

“In addition to their impactful philanthropy, Chuck and Karen have given a significant amount of their time and energy as we build out our campaign priorities, formalize our volunteer infrastructure and generate critical campaign momentum. They are passionate and humble Marquette alumni leaders,” McMahon said.

Men’s basketball gift
For 18 straight years, the Marquette men’s basketball team finished among the top-25 teams in the nation in regular season average attendance thanks to the dedication and support of its tremendous fan base. The Swobodas have donated $1.5 million of the gift to support the program’s continued growth.

“Chuck and Karen have been tremendous friends of our men’s basketball program, helping us to thrive at an elite-level,” said Bill Scholl, vice president and director of athletics. “When you have a program that is both steeped in tradition and poised for new growth, it is our passionate supporters who make all the difference.”

Chuck Swoboda joked that he made an early commitment to Marquette.

“I made my decision to attend Marquette on March 28, 1977, when I was 10 years old,” Chuck said, noting that his brother was a Marquette student at the time of the team’s historic victory in the NCAA Championship. “I said to myself, ‘If Marquette wins this game, I am going to Marquette University.’ Karen and I are even more excited for the future of Marquette basketball. We believe in this team and have seen the tremendous progress made over the past five years, both on and off the court. Our future is bright.” 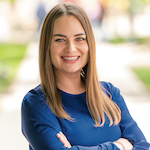