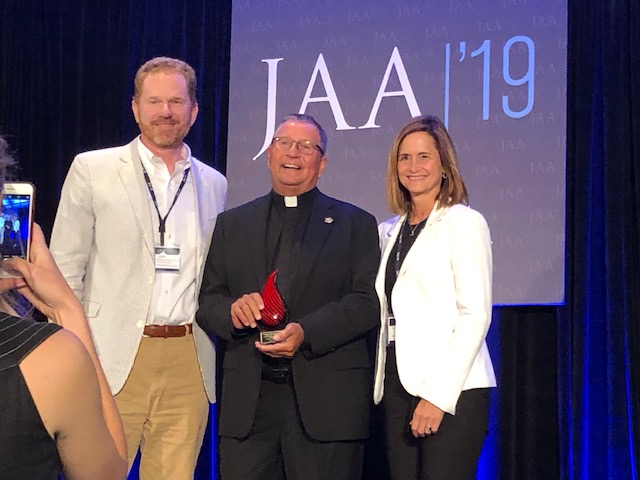 The McGannon Award is the highest honor JAA can bestow on one of its colleagues. Created in 1994 and conferred bi-annually, the award recognizes individuals who have made a significant long-term commitment to Jesuit higher education and the advancement profession through service to their institution or other Jesuit institutions and organizations.

“Father Zagone’s commitment to Catholic, Jesuit ministry in higher education is a shining example to all who live a life of faith and service,” said Marquette President Michael R. Lovell. “The Marquette University community is proud to call him a leader and friend — he truly deserves this honor.”

Father Zagone joined Marquette in 1998 as director of development for what became the John P. Raynor, S.J., Library, completed in 2003. In 2002, he was named assistant to the vice president for university advancement before being appointed to vice president of the Office of Mission and Ministry in 2018.

In addition to his fundraising responsibilities, Father Zagone has served as the chaplain to the Marquette National Alumni Association, the Association of Marquette University Women, the Marquette Parents and Friends Leadership Council, the Friends of the Haggerty Museum, and the Women’s Council. He is a hall minister for Marquette’s Humphrey Hall, the minister of the Dr. E. J. O’Brien Jesuit Residence, and often celebrates Mass both in the Milwaukee community and on campus, including in Marquette’s iconic St. Joan of Arc Chapel.

Father Zagone was a member of the JAA board for 15 years. In that time, he demonstrated a dedication to providing meaningful programming and development opportunities for his colleagues in helping plan the annual JAA conference.

JAA is a professional organization of advancement staff serving Jesuit higher education in the United States. Advancement professionals engaged in development, alumni relations, public relations and publications, and government relations are among the constituents served by the programs and activities of JAA. The organization operates under the umbrella of the Association of Jesuit Colleges and Universities.