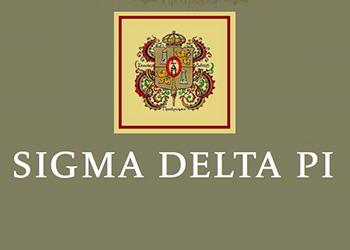 MILWAUKEE — Marquette University’s Gamma Gamma chapter of Sigma Delta Pi, the National Collegiate Hispanic Honor Society, has been named an “Honor Chapter” for its outstanding activities for the 26th time in 2018-19.

The Marquette chapter is one of just two in the nation to receive the honor as many times in the 100-year history of Sigma Delta Pi. Just 16 chapters of over 625 nationally earned honors in 2019.

“I am very proud of the work that our members undertake on a yearly basis with their service to the community but also their efforts to build community around campus and the city Milwaukee,” said Dr. Jeffrey Coleman, assistant professor of Spanish and chapter adviser. “Marquette’s Gamma Gamma chapter carries the university’s Catholic, Jesuit values into its programming. It’s great for them to be recognized nationally in order to provide a model for others to follow.”

In the past year, Marquette’s Sigma Delta Pi chapter ran food and toy drives for local community ministries, provided translation services at parent-teacher conferences in Milwaukee Public Schools and partnered with Innovation Kitchen on campus to host a cooking class with classic Spanish dishes such as croquetas, gazpacho and tortilla española.

Marquette established its Sigma Delta Pi chapter in 1950. In addition to its 26 honors awards, the organization has earned the Spirit of Marquette Award for outstanding service and dedication to Milwaukee and the Marquette community, as well as the Office of Student Development Award for Best Community Service Project. Twenty-six new members were initiated in 2018-19, growing the chapter to over 70 members.

Each summer, the more than 625 chapters of Sigma Delta Pi are asked to submit an annual report detailing their numerous activities and projects from the academic year. Based on these reports, the National Executive Committee chooses approximately 10 to 15 Honor Chapters annually. This recognition is based upon the caliber of chapter projects that reflect the Sigma Delta Pi mission of honoring excellence in the study of the Spanish language, contributing to cultural understanding and upholding the goals of the society.

With its national office at the College of Charleston in South Carolina, Sigma Delta Pi is a member of the Association of College Honor Societies, the nation’s only certifying agency for college and university honor societies.