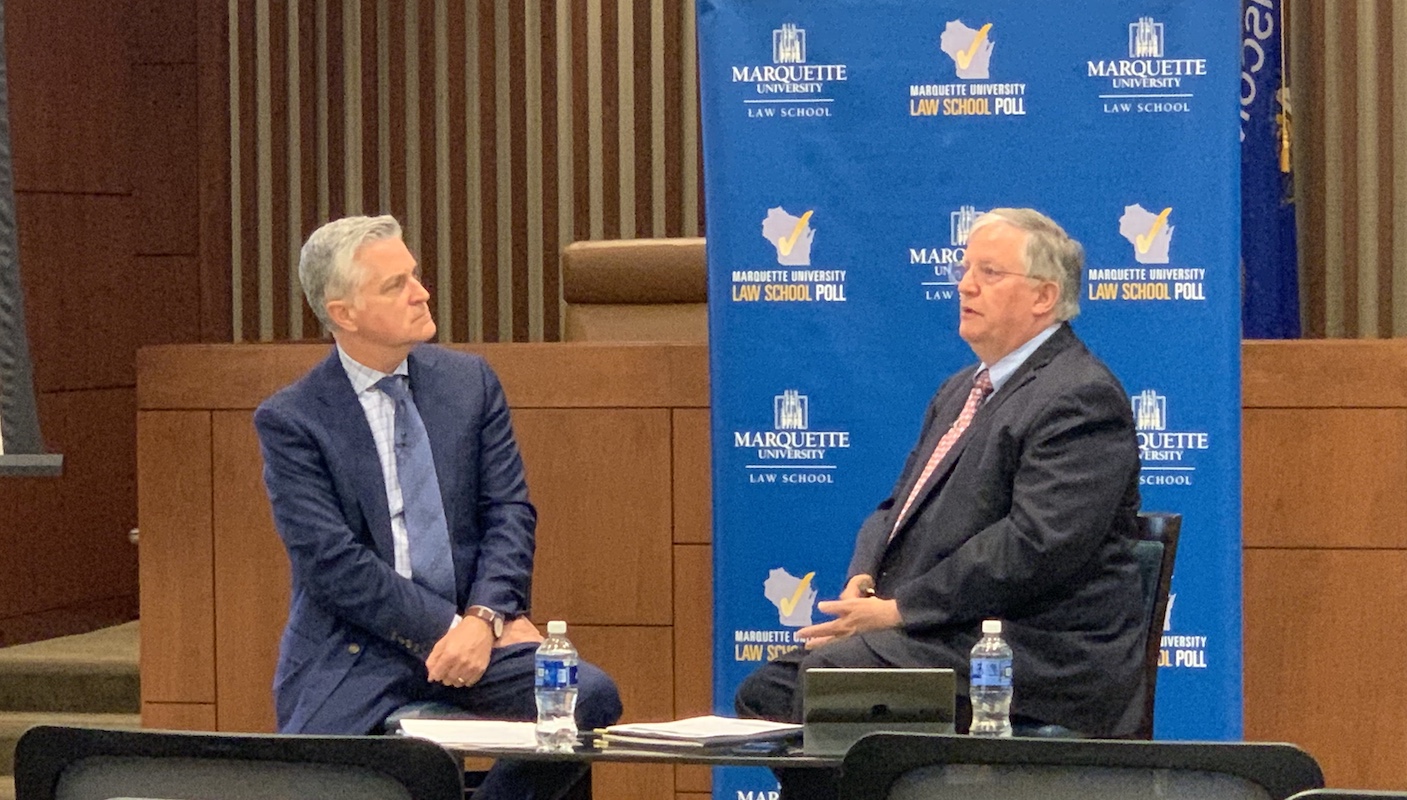 MILWAUKEE – A new Marquette Law School poll of Wisconsin registered voters finds that support for impeachment has not changed following the conclusion of public testimony before the Intelligence Committee of the U.S. House of Representatives in November.

In the new results, 40 percent think that President Donald Trump should be impeached and removed from office, while 52 percent do not think so and 6 percent say they do not know. One percent volunteered that they thought Trump should be impeached but not removed from office. In November, 40 percent favored impeachment and removal from office, while 53 percent were opposed and 6 percent said they didn’t know. The November poll was conducted during the first week of public testimony before the Intelligence Committee but before the second week of testimony.

In October, before public hearings began, 44 percent favored impeachment and removal from office, while 51 percent were opposed and 4 percent said they didn’t know.

The new survey was conducted Dec. 3-8, 2019, after the conclusion of public testimony before the Intelligence Committee in the congressional impeachment hearings. The House Judiciary Committee heard testimony from four constitutional law professors on Dec. 4, during the field period for the survey.

The trend in responses to this question is shown in Table 1.

Table 1: Impeach and remove Trump from office by survey dates

The poll sample included 800 registered voters in Wisconsin interviewed by cell phone or landline, with a margin of error of +/- 4.2 percentage points.

Democratic presidential primary preference items were asked of those who said they will vote in the Democratic primary in April. That sample size is 358, with a margin of error of +/-6.3 percentage points.

Views of impeachment by partisanship and attention to hearings

There are large partisan differences in views of impeachment, with Democrats much more supportive and Republicans much more opposed, and a plurality of independents opposed. These partisan divisions have changed only modestly from October to December.

Table 5: Did Trump ask for investigation of political rivals by party identification

Republicans are less likely to think that Trump withheld aid to pressure Ukraine for an investigation, with two-thirds of Republicans saying that Trump did not withhold aid, whereas about eight in ten Democrats say that he did so. Almost half of independents, 48 percent, say they don’t know if Trump withheld aid, with 33 percent saying he did and 18 percent saying he did not.

Table 6: Did Trump withhold aid to pressure Ukraine for investigation of political rivals by party identification

There are no statistically significant differences in attention to the hearings between Republicans and Democrats, although independents are more likely to say they are not following closely at all.

Table 8: Did Trump ask for investigation of political rivals by attention to hearings

Table 9: Did Trump withhold aid to pressure Ukraine for investigation of political rivals by attention to hearings

Among those who say they will vote in the Democratic presidential primary in April, Joe Biden receives the most support. Biden is the first choice of 23 percent, followed by Bernie Sanders at 19 percent, Elizabeth Warren at 16 percent and Pete Buttigieg at 15 percent. Corey Booker is the first choice of 4 percent. Recently announced candidate Michael Bloomberg has the support of 3 percent, as does Andrew Yang and Amy Klobuchar.

The complete results for the Democratic primary are shown in Table 13.

Two-thirds of Democratic primary voters, 65 percent, say they might change their minds about their primary choice, while 34 percent say their mind is made up.

Among the Democratic primary sample, favorability of candidates is shown in Table 14.

Forty-seven percent approve of the job Trump is doing as president, with 50 percent disapproving. That is little changed from October when 47 percent approved and 51 percent disapproved. The approval-disapproval ratio of 47-50 matches Trump’s best rating in the Marquette Law School Poll since taking office, that from Oct. 24-28, 2018.

Trump’s job approval is high among Republicans, is low among Democrats, and is split among independents as shown in Table 16.

Views of how Trump has changed the Republican party vary by partisanship, with Republican identifiers more positive about the effect Trump has had on the party, as shown in Table 17.

Table 17: Has Trump changed GOP for better or worse, by party identification

Table 18: Economic evaluation of past year

Table 19: Economic outlook for next year

Gov. Tony Evers’ job approval stands at 50 percent, with disapproval at 38 percent. Eleven percent say they don’t have an opinion. In November, 47 percent approved, while 42 percent disapproved. The trend in job approval of the governor is shown in Table 20.

Table 21 presents the favorability ratings of elected officials in Wisconsin and the percentage of respondents who haven’t heard enough or say they don’t know.

About the Marquette Law School Poll

The Marquette Law School Poll is the most extensive statewide polling project in Wisconsin history. This poll interviewed 800 registered Wisconsin voters by landline or cell phone, Dec. 3-8, 2019. The margin of error is +/-4.2 percentage points for the full sample.

The Democratic presidential candidate preference items were asked of those who said that they will vote in the Democratic primary. That sample size is 358 with a margin of error of +/-6.3 percentage points.

The entire questionnaire, methodology statement, full results and breakdowns by demographic groups are available at law.marquette.edu/poll/results-and-data.