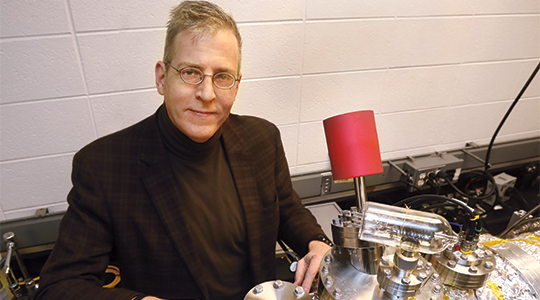 MILWAUKEE — Dr. Scott Reid, professor of chemistry at Marquette University, has been named an American Chemical Society Fellow and will be feted at the society’s fall national meeting in San Diego. The ACS Fellows Program recognizes members for outstanding achievements in and contributions to science, the profession and the society.

The ACS Fellows Program recognizes members for outstanding achievements in and contributions to science, the profession and the society, noting that only about 1% of its members have been so honored.

“The Chemistry Department is tremendously excited for Dr. Reid in receiving this rare honor,” said Dr. James Kincaid, chair of chemistry at Marquette. “He epitomizes the ideals of a Marquette University faculty member and has emerged as one of the important national leaders of the ACS. We are so proud to see his devotion to research and the advancement of the field of chemistry be so honored.”

Reid has been repeatedly recognized by the university in the form of the 2019 Lawrence G. Haggerty Faculty Award for Research Excellence and, earlier, the 2010–11 Way Klingler Sabbatical Award and the 2015–18 Way Klingler Science Fellowship Award. Furthermore, an inspiring teacher, he received the Robert and Mary Gettel Faculty Award for Teaching Excellence in 2007 in recognition of his impressive ability to communicate scientific information.

Reid is currently the vice chairperson of the ACS Committee on Professional Training, which promotes excellence in postsecondary chemistry education and provides leadership to the ACS in the professional training of chemists.

Founded in 1876 and chartered by the U.S. Congress, ACS is the world’s largest scientific society. Its mission is to advance the broader chemistry enterprise and its practitioners for the benefit of Earth and its people. The vision of ACS is to improve people’s lives through the transforming power of chemistry.