Howard Fuller, distinguished professor of education, to retire from Marquette 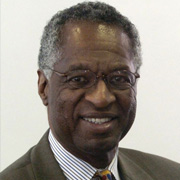 MILWAUKEE — Dr. Howard Fuller, distinguished professor of education and founder/director of the Institute for the Transformation of Learning, has announced his retirement from Marquette University at the end of June 2020.

An outspoken advocate and activist for educational opportunities, he initially joined the university over 40 years ago as associate director for the Education Opportunity Program from 1979-83 and later founded the ITL in 1995.

“Howard Fuller has been a national figure in the education arena for decades, and the work he’s done on behalf of school children of color through the Institute for the Transformation of Learning has been broadly and deeply impactful,” said Dr. Bill Henk, dean of the College of Education. “He’s held a wealth of important leadership positions across multiple sectors and is singularly as much a champion of social justice as anyone I’ve ever encountered. The College of Education wishes our valued colleague and alumnus the very best in the next chapter of his life.”

Throughout his career, Fuller has been a staunch promoter of school choice and a passionate champion for the equitable education of African American children. In addition to his positions at Marquette, he also served as superintendent of Milwaukee Public Schools, senior fellow in the Annenberg Institute for School Reform at Brown University, secretary of Wisconsin’s Department of Employment Relations, and director of the Milwaukee County Department of Health and Human Services.

Fuller founded the ITL to provide quality educational options for students of low-income families. Since then, the institute has won nearly $14 million in grants from local and national foundations for working across systems to reform K-12 education in Milwaukee and nationally. The primary beneficiaries for all of the work of the institute are low-income children and families in the city of Milwaukee and children anywhere who are being ill-served by the current systems of education.

His work in the community has also included serving as chair on the boards of Black Alliance for Educational Options, Alliance for Choices in Education in Milwaukee, CEO Leadership Academy and Quest-Milwaukee, as well as chair of The Charter School Review Committee for the city of Milwaukee. He has also served on the board of directors for the Transcenter for Youth, Johnson Foundation, Joyce Foundation, School Choice Wisconsin and Advocates for School Choice.

Fuller earned his Ph.D. in sociological foundations of education from Marquette in 1995 and has received honorary doctorates in humane letters from Carroll University and Edgewood College, a doctorate of laws from Marian University, and a doctorate of business and economics from Milwaukee School of Engineering. The Dr. Howard Fuller Collegiate Academy, a charter school in Milwaukee, is also named in his honor.