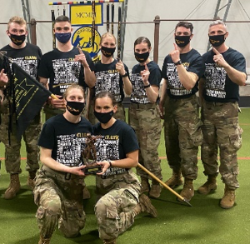 Nearly 40 teams from higher education institutions from across the country will compete at the Sandhurst Military Skills Competition to determine who has the best ROTC programs and military skills.

Marquette’s team is made up of 11 student cadets and two cadre, or active-duty officers and faculty members. Marquette was selected to compete in the coveted competition after placing second at the Black Hawk Ranger Challenge in Fort Leonard Wood, Missouri, last month, where six Army ROTC programs from universities across the Midwest competed in a weekend full of military challenges.

Marquette also placed second in the 2020 Black Hawk Ranger Challenge. This year marks the third year in a row that Marquette’s team has advanced to the Sandhurst competition. Marquette placed 16 out of 49 total teams in the 2019 competition, while the 2020 competition was then cancelled as a result of the coronavirus pandemic.

The Sandhurst competition, which dates back to 1967, is the world’s premier international academy military skills competition that entails rigorous physical and mental challenges that reflect the tempo, uncertainty and tasks of military combat operations. The competition is also meant to strengthen relationships among partners allies and to foster multi-national cohesion and interoperability — showcasing the tenacity and grit of future leaders of the Armed Forces.

During the competition, cadets will need to think rapidly and adapt to succeed. The competition includes more than a dozen grueling events that will test cadets’ ability to move, communicate, medicate, lead and more. The competition will conclude at “The Crucible” — a final challenge designed by the Military Ninja Warrior which focuses on physical and mental toughness and agility.

Matthew Oldendorf, senior Marquette Army ROTC cadet and team captain, said advancing to the 2021 Sandhurst Competition is a sweet “last hoorah” to his senior year with ROTC at Marquette.

“It’s also an experience I can enjoy with younger Cadets to impress upon them our continued tradition of winning,” Oldendorf said. “The Golden Eagle Battalion at Marquette University Army ROTC qualified to attend the Sandhurst competition for three consecutive years now, making us proud to be one of the most dominant programs in the country.”

Lt. Colonel Ioannis Kiriazis, said that Marquette University’s Army ROTC Golden Eagle Battalion qualifying to make it to the Sandhurst competition makes this year — his final semester as a professor of military science at Marquette — all the more noteworthy.

“I will always be proud of this program’s cadets and in the fortitude of knowing that more will pass through our halls at the Old Gym and I am confident they will go on to become some of the most talented American military officers in our Army,” Kiriazis said. “Our fighting spirit is exemplified in those we send to compete in tough competitions like West Point’s annual Sandhurst Competition. As a West Point 1996 alum, there’s a very special feeling of pride knowing that I have the privilege of sending Marquette Army ROTC Cadets to enthusiastically compete and perform at a competition on the grounds of my alma matter.”

Media wishing to cover this story should contact Shelby Williamson in the Office of Marketing and Communication at shelby.williamson@marquette.edu or (262) 441-0516.