MEDIA AVAILABILITY: Judge Mosley will be available to the media for interviews 1-3 p.m. on Tuesday, Nov. 1, at Eckstein Hall, 1215 W. Michigan St. To schedule an interview, contact Kevin Conway, associate director of university communication at kevin.m.conway@marquette.edu. 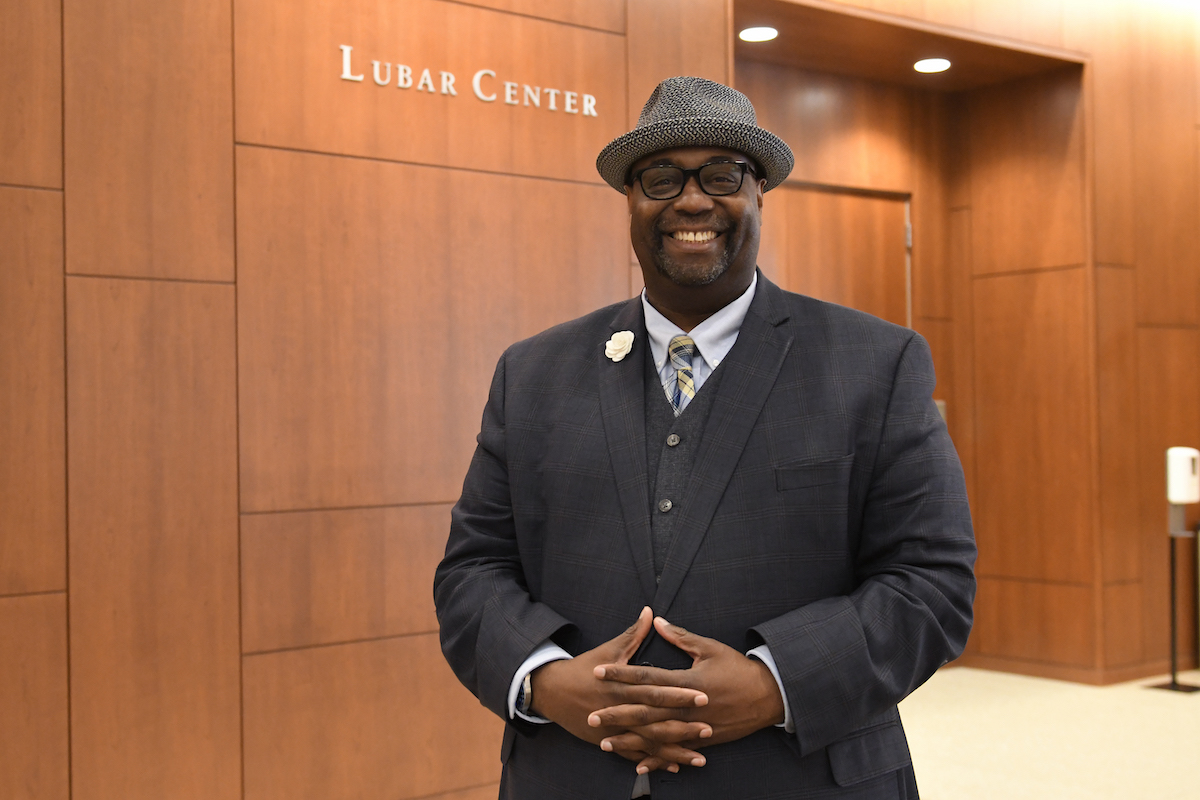 MILWAUKEE — Derek Mosley, a judge of the Milwaukee Municipal Court for 20 years, has been named the director of Marquette University Law School’s Lubar Center for Public Policy Research and Civic Education, Marquette President Michael R. Lovell announced today. Mosley, who was appointed Municipal Court Judge in 2002 following a seven-year career as an assistant district attorney for Milwaukee County, will begin his new role on Jan. 9, 2023.

“The Marquette community is blessed to welcome Derek Mosley back to campus as the director of the Lubar Center. Our students and community will benefit greatly from Derek’s breadth of knowledge, keen understanding of social dynamics and extensive nonprofit experience,” Lovell said. “The Lubar Center serves as an important hub of public discourse in Milwaukee, and Derek’s deep connections and love for our city will help further the center’s mission in profound ways.”

A 1995 alumnus of Marquette Law School, Mosley will lead the Lubar Center. In this role, he will conduct public events and work with colleagues to develop robust programming that will fulfill and expand the law school’s role as a public square for timely and important public policy discussions.

“I am thrilled to be coming home to Marquette to serve the public good in new and valuable ways as director of the Lubar Center,” Mosley said. “It has been my great honor to have served the people of Milwaukee for more than 27 years, first as a prosecutor and then a presiding judge. I now look forward to the unique and exciting challenge of helping to advance public understanding of and discourse around matters of law and public policy through the city’s preeminent public forum.”

The Lubar Center is home to an expansive schedule of research and public programming such as the Marquette Law School Poll, “On the Issues” conversations with newsmakers, public lectures by leading scholars, and conferences on issues of public significance. The work of the Lubar Center advances Marquette Law School’s mission to advance civil discourse about law and public policy matters.

“The law school has been engaged with the broader public since its founding, but our outreach and engagement took on new forms and importance in 2007, with the appointment of Mike Gousha as distinguished fellow in law and public policy, and in 2017, with the establishment of the Lubar Center,” said Joseph D. Kearney, dean and professor of law. “With Mike’s stepping back from full-time duties earlier this year, we searched for an individual of inquiry and integrity to continue and expand our work, as director of the center. His background and relationships in Milwaukee help make Judge Mosley uniquely qualified for this role, and I am grateful for his confidence and enthusiasm about his new role.”

“Since its inception, the Lubar Center has sought to be a public resource for this region, a home for important conversations, new ideas, and independent polling and research,” said Mike Gousha, who now serves as senior advisor in law and public policy at the law school. “As a respected voice and innovative thinker on law and public policy matters, Judge Mosley is a terrific choice to build on the Lubar Center’s previous work and expand its reach in the years ahead.”

After graduating from Marquette Law School, Mosley served as an assistant district attorney for Milwaukee County from 1995 to 2002. He was then appointed by the Milwaukee Common Council to fill the vacancy in Branch 2 of the city’s Municipal Court starting on Aug. 1, 2002. At the time of his appointment, he was the youngest African American to be appointed judge in the State of Wisconsin. In August 2004, he was first appointed Presiding Judge of the Milwaukee Municipal Court.

As an assistant district attorney, Mosley represented the State of Wisconsin in more than 1,000 criminal prosecutions and helped found the Milwaukee County District Attorney’s Community Prosecution Unit. This unit places assistant district attorneys in neighborhoods throughout the City of Milwaukee to work with residents to reduce urban blight and to improve the quality of life. As the head of this unit, he helped to establish after-school programs, develop a Second Chance Felony Employment Initiative for offenders, close 100 drug houses and nuisance properties, and start a police and citizen crime fighting initiative, which targeted street drug dealing. This initiative, called “Operation Streetsweeper,” was awarded the Law Enforcement Honor Award by the United States Department of Justice.

Mosley sits on the Board of Directors of several organizations, including Froedtert Hospital, the Urban Ecology Center, the YMCA of Metropolitan Milwaukee, Safe and Sound, Divine Savior Holy Angels High School, the United Way Diversity Leadership Committee, and TransCenter for Youth, a longtime operator of small high schools in Milwaukee. He has been a lecturer at both Marquette Law School and the University of Wisconsin-Milwaukee, and he sits on the Supreme Court of Wisconsin’s Judicial Education Committee

Mosley’s community engagement is not limited to the legal and philanthropic, as he has become a visible presence throughout Milwaukee. In his spare time, he routinely speaks both nationally and internationally about unconscious bias and Black history. Mosley is also a popular wedding officiant, having officiated more than 1,000 weddings, and a local Milwaukee foodie. He served as a 2022 James Beard Judge for the James Beard Foundation and recently began a regular feature on WUWM’s Lake Effect, “Monthly with Mosley,” where he discusses Milwaukee food and history.