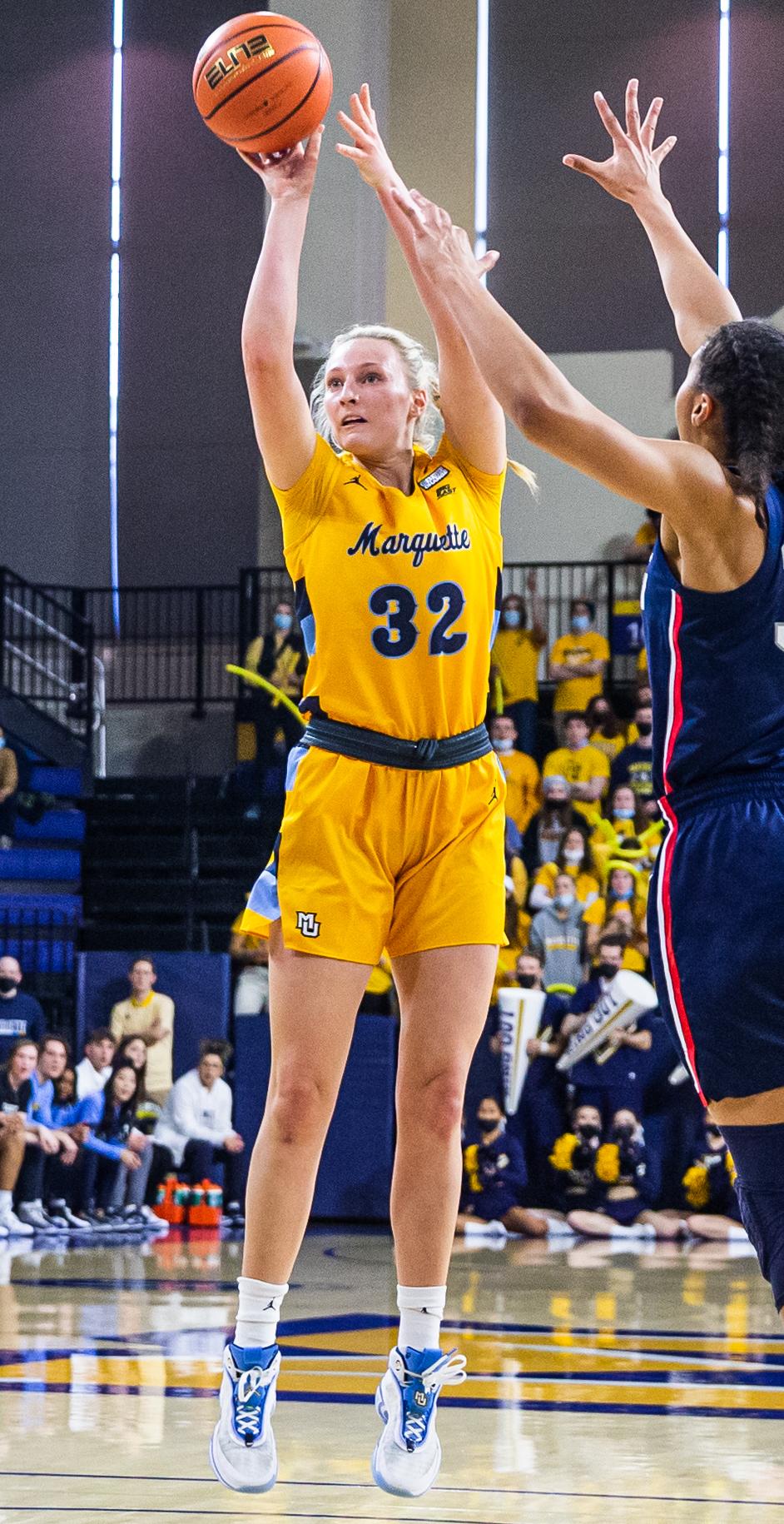 “Marquette has a long history of excellence in women’s athletics, and this initiative will make a meaningful impact on our prestigious programs,” President Michael R. Lovell said. “Come to any event for our women’s teams, and you’ll see the love our fans, alumni and students have for these great student-athletes and leaders.”

Marquette has a strong heritage of success in women’s athletics, beginning with tennis, volleyball and basketball in 1975 and 1976. For Marquette student-athletes to continue to achieve success in the classroom, on the field and in the community, Sport Excellence Funds are separate from normal operating budgets and are used to maintain and enhance the student-athlete experience. The excellence funds are essential to the coaches so that programs can stay competitive in recruiting, upgrade technology, travel on foreign trips and provide leadership development opportunities for current and future female Golden Eagles.

“Our women’s athletics programs are a true beacon for the university, and our female student-athletes and coaches become incredible role models for young women,” said Bill Scholl, vice president and director of intercollegiate athletics.

Championing through scholarship
The Elevating Excellence initiative is catalyzed by the creation of the first full-tuition endowed scholarship for women’s athletics thanks to an estate pledge from Marquette alumni couple Michael and Barbara Klein. The couple has also established an endowed women’s basketball scholarship and provided annual support to the women’s basketball excellence fund.

“For the student-athlete recipient, scholarship is a chance to live the Marquette experience. We hope our support will open doors and lay a foundation for student-athletes to thrive throughout their time on campus, as part of a Marquette team, and after graduation,” the Kleins said. “The women’s basketball program is on such a positive trajectory. Coach Duffy has done a great job developing our student-athletes and preparing them to be successful in the world beyond the court.”

Women’s Head Basketball Coach Megan Duffy has gotten off to the best two-year start of any coach in Marquette women's basketball history, going 43-15 and 27-9 in BIG EAST play. The Kleins hope their gift provides the university with a powerful national recruiting tool and a foundation from which to build further support.

“The reputation of our women’s teams speaks to the great enthusiasm and support of the university, our fans, and our entire Marquette family,” Duffy said. “For basketball and beyond, the idea of Elevating Excellence in Women’s Athletics will provide our student-athletes — and incoming student-athletes — with even more opportunities as part of their time at Marquette.”

“I am pleased to ‘tip off’ the Marquette Women’s Basketball Excellence Fund,” said Sobczak, who with his late wife Nancy, has supported a variety of scholarships across Marquette. “After seeing these young women play basketball together year after year and meeting them individually, it became clear that they are exemplars of what athletic competition in college means. They are building their own storied history and are encouraging a growing fan base to come to Marquette’s campus and watch women’s basketball.”

The Elevating Excellence in Women’s Athletics initiative reflects a groundswell of support for women’s athletics at Marquette, an energy and excitement tied closely with the university’s Time to Rise philanthropic campaign. To date in the campaign, Marquette has raised $3.6 million toward women’s sport excellence funds and endowed scholarships for women’s sports.

Those inspired to invest in the development and success of Marquette women’s student-athletes can learn more at give.marquette.edu/womens-excellence.

Time to Rise: The Marquette Promise to Be The Difference
Marquette’s $750 million comprehensive fundraising campaign, which is the most ambitious in Marquette’s 140-year history, is elevating resources to advance the university’s mission and pillars of excellence, leadership, faith and service. The university has raised more than $582 million to date, amounting to 77% of its goal. More than 56,000 donors have already supported Time to Rise, including 44% of donors making their first-ever gift to the university.