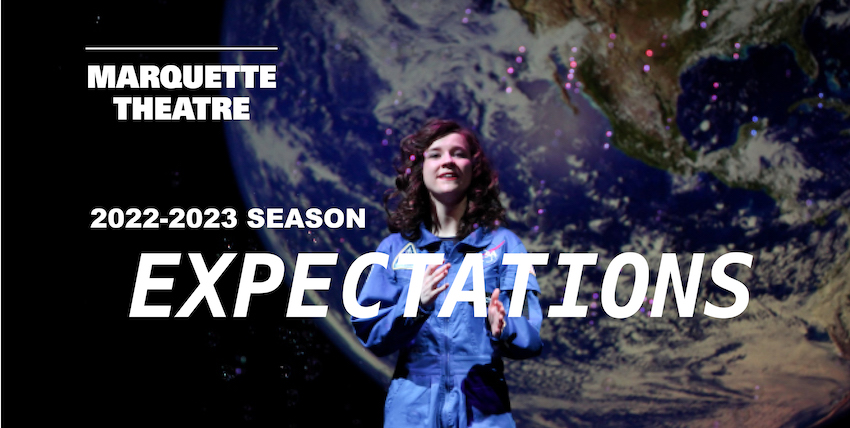 MILWAUKEE — Marquette Theatre has announced the schedule for its 48th annual season, “Expectations.” Performances will return to live theatre in the Evan and Marion P. Helfaer Theatre, 1304 W. Clybourn St.

The season begins with a musical comedy, “The 25th Annual Putnam County Spelling Bee,” and is followed by a pair of shows presented in Marquette Theatre’s Second Stage Series: “The Wolves” and “From White Plains.” It continues with Oscar Wilde’s “The Importance of Being Earnest” before wrapping up with “Detroit ’67,” a Voices Included for People of Color (VIP) Theatre production.

“Marquette Theatre is pleased to announce our 2022-23 season, titled ‘Expectations!” said Jamie Cheatham, associate professor in theatre arts and artistic director. "Throughout our season, our characters have high expectations of victory, of accountability, or even to have cucumber sandwiches. We expect our patrons will be delighted with our range of shows, including a fun-filled musical, our Second Stage Series—presenting two shows in rotation—as well as another great VIP show.”

Tickets are available now for all shows through the Marquette Theatre ticketing webpage. For more information about performances, please contact the Helfaer Box Office at (414) 288-7504 or helfaer.boxoffice@marquette.edu.

In this wildly funny and touching musical, six awkward tween-age spelling champions compete to be the best. As we learn about each contestant, they learn that winning (and losing) isn't everything. Dust off your dictionary and expect to laugh out loud with this fun-filled, Tony Award-winning show.

The Second Stage Series was first launched in the 2021-22 season, presenting two shows in rotation. These shows are stripped-down with intimate seating and are designed to put the acting in the spotlight.

This Pulitzer Prize-finalist features an all-female cast. “The Wolves” explores the world of high school soccer players in suburban America. As they warm-up before games, the girls discuss everything from boys to eating disorders, the new girl and the Khmer Rouge. While the team expects victory, they learn about real loss and identity in a writing style that rings amazingly true.

“The Wolves” is presented by arrangement with Concord Theatricals on behalf of Samuel French, Inc.

While watching the Academy Awards, 30-year-old Ethan finds himself having to confront who he was and what he did as a teenager. “From White Plains” follows four men as they deal with responsibility for past actions and expect to move beyond them, complicated by social media and viral videos. The play examines how male relationships change as boys grow into men and the lasting effects of LGBTQ+ bullying.

Oscar Wilde’s beloved comedy classic! When Jack and Algernon expect to achieve romantic success by using the same pseudonym, hilarity ensues. This piece of theatre perfection is permeated with Wilde’s wit and his charismatic characters—from a tempestuous tea with Gwendolyn and Cecily, to the biting rebuffs of Lady Bracknell... perhaps Miss Prism will put things right!

The VIP Theatre company directly serves people of color and minoritized individuals who self-identify as theatre creators in all areas of theatre. VIP Theatre seeks to provide performance and career building opportunities for the Marquette and Milwaukee theatre communities; professional artists of color serve as role models for students and alumni.

In 1967 Detroit, Motown music is getting the party started, and Chelle and her brother Lank are making ends meet by turning their basement into an after-hours joint. But, when a mysterious woman finds her way into their lives, the siblings clash over much more than the family business. As their pent-up feelings erupt, so does their city, and they find themselves caught in the middle of the 1967 riots.

“Detroit ’67” is presented by arrangement with Concord Theatricals on behalf of Samuel French, Inc.