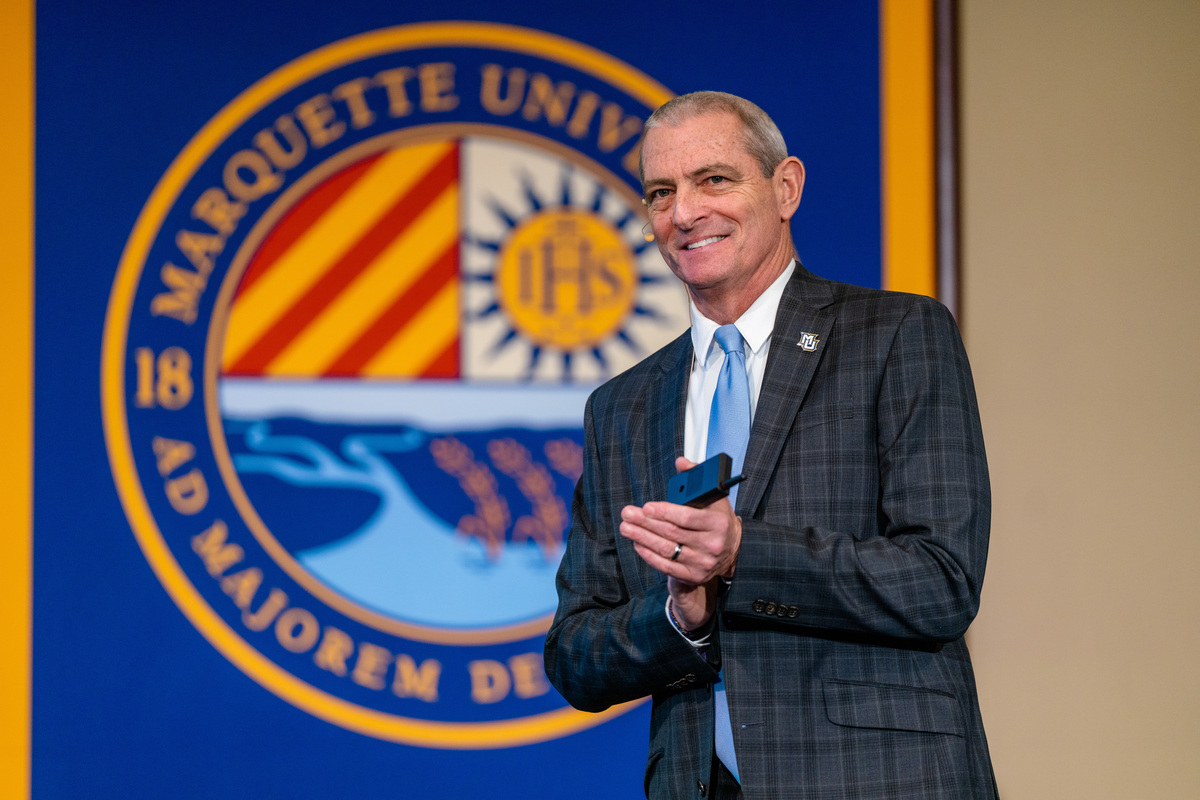 MILWAUKEE — Marquette University President Michael R. Lovell celebrated the university’s momentum during 2022, while also sharing some new initiatives for the year ahead in his ninth annual Presidential Address on Wednesday.

“2022 was a year of great strides for Marquette University," President Lovell said. "We have so much momentum going forward. We are in such a position to be successful.”

The 2022 President’s and Chancellor’s Challenge focused on the urgent issue of poverty, its root causes and its subsequent effects on members of the community. Interdisciplinary research teams were composed of faculty and staff from Marquette and UWM, as well as community organizations. Awardees included:

At the address, the Bucks made their first “draft choice” for the new Marquette and Bucks Fellowship Program, Marquette student Christian Golden. He will begin with the Bucks organization this month and the fellowship runs through the end of the NBA season. The fellowship is open to students from Marquette’s Urban Scholars program, which offers full tuition, four-year scholarships annually to high achieving scholars from financially disadvantaged backgrounds from high schools in the Milwaukee area.

In an eagerly anticipated announcement that has been brewing on social media, President Lovell unveiled a new student venture, Blue & Gold Brewing LLC. This private label Marquette-affiliated beer producer comes out of Blue and Gold Ventures, the student-run business program in the College of Business Administration and is a unique partnership with Marquette alumni brewing leaders.

Marquette University is a Catholic, Jesuit university located near the heart of downtown Milwaukee that offers a comprehensive range of majors in 11 nationally and internationally recognized colleges and schools. Through the formation of hearts and minds, Marquette prepares our 11,100 undergraduate, graduate, doctoral and professional students to lead, excel and serve as agents of positive change. And, we deliver results. Ranked in the top 20% of national universities, Marquette is recognized for its undergraduate teaching, innovation and career preparation as the sixth-best university in the country for job placement. Our focus on student success and immersive, personalized learning experiences encourages students to think critically and engage with the world around them. When students graduate with a Marquette degree, they are truly prepared and called to Be The Difference.