DISTINGUISHED ALUMNA OF THE YEAR AWARD 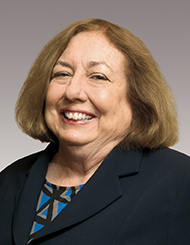 Maureen doesn’t believe she’s one to judge whether she lives out the Marquette mission, but her work as president of the Council for Opportunity in Education all but affirms that she is.

“It allows me to give voice to the aspirations of talented young people and adults whose aspirations and talents might otherwise be ignored,” Maureen says.

The nonprofit’s mission is to increase opportunities for low-income and first-generation students and students with disabilities to go to college — a mission to which Maureen has personally dedicated her life. She began her career at Marquette’s Educational Opportunity Program under its then-director Dr. Arnold Mitchem. When Mitchem became the founding president of COE, Maureen joined him, growing the organization into what it is today. Thanks to COE, more than one million students in need receive college access and retention services annually.

COE also advocates for federally funded TRIO programs that support students from disadvantaged backgrounds pursuing college degrees. More than 1,000 students are served by TRIO programs in Marquette’s Educational Opportunity Program. At its annual conference last year, COE honored Academy Award-winning actress Viola Davis, three of her sisters and their mother with the first-ever TRIO Family Achievement Award; each sister had participated in two TRIO programs. Unknowingly, the actress’ speech perfectly defined Maureen’s connection to her work and alma mater: “Ms. Davis noted that TRIO taught her not to focus on success, but rather on significance. Marquette was a major driving force in shifting my focus from success to significance.”

Fun Fact: Maureen chose to attend Marquette because “Marquette was recognized as the first Catholic university to emphasize the role of lay people, certainly as theologians but also as leaders of the church.”