SERVICE TO THE COMMUNITY AWARD 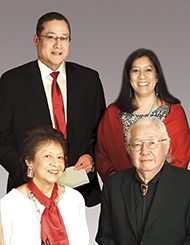 As Native Americans descended from the Coeur D’Alene and Menominee tribes respectively, Gerald and Georgianna have long been involved in efforts to improve Native health care. Along the way, they have instilled in their children, including Lyle and Thekla, the importance of service to the Native community.

In the early 1970s, Gerald and Georgianna co-founded the Milwaukee Indian Health Board along with a clinic to serve the city’s Native community. They later secured funding from the Indian Health Service to keep the clinic open and relocated it in 2015 to a neighborhood with more Native residents.

Gerald grew up on the Coeur D’Alene Reservation in Idaho, attended Gonzaga University and came to Marquette for medical school. He went on to serve three years as a commissioned officer of the Indian Health Service, cementing his lifelong commitment to improving Indian health and increasing the number of Natives entering health professions. He currently practices with Ascension Medical Group.

Georgianna was raised on the Menominee Reservation in northeastern Wisconsin and met Gerald in 1962 at an Indian leadership course in Colorado. She chaired GLIIHC’s board from 1996 to 2014. In 2003, she was confirmed as a presidential appointee to the board of trustees of the Institute of American Indian Arts and has served on multiple boards of organizations devoted to advancing the education and health of Native populations. As her children got older, Georgianna found time to earn a degree from Marquette’s School of Speech.

As Georgianna was completing her studies in spring 1988, Lyle was preparing to enter the Klingler College of Arts and Sciences. He participated in summer courses through the Freshman Frontier Program. “Attending Marquette inspired me to feel like anything is possible, and that hard work does pay off,” Lyle says. “It allowed me to flourish in an academic setting that supported me as a Native student.”
Thekla was right behind her brother, transferring to Marquette from Colorado State to be closer to family. After graduation, she embarked on a career in accounting that has led her to her current role at FIS Global.

Lyle, who completed medical school at the University of Minnesota and earned his master’s in public health from the Harvard School of Public Health while also a fellow in minority health policy, is now executive director of GLIIHC. A partnership with Marquette’s Department of Physical Therapy has established a full-scale clinical practice at GLIIHC, and the center also hosts and mentors Marquette nursing students on rotations.